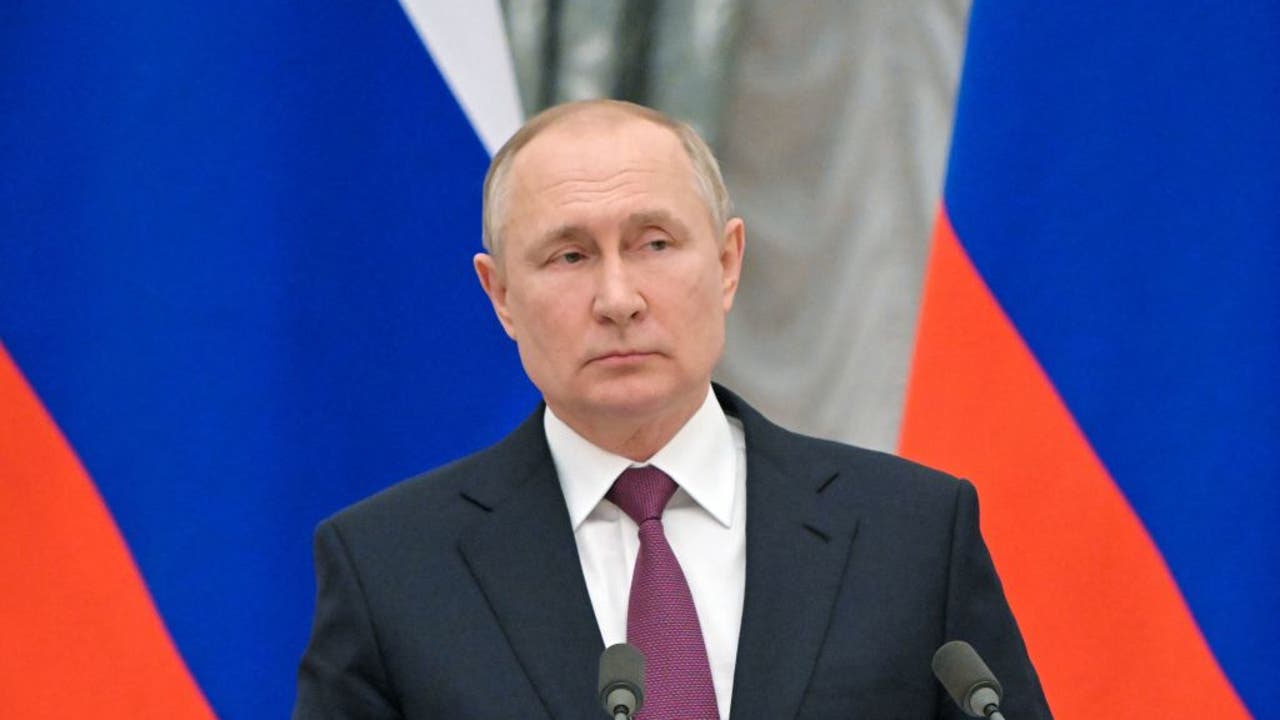 Residents living along the Ukrainian border fear for their lives amid rising tensions in the region. Images show the damage, including blown windows and shells on the ground.

A vaguely worded decree signed by Putin did not specify whether the troops were on the move, and he framed the order as an effort to “keep the peace”. But it seemed to dash any remaining slim hopes of averting a major conflict in Europe that could cause massive casualties, power shortages on the continent and economic chaos around the world.

Putin’s directive came hours after acknowledging breakaway areas in a rambling and factual speech about European history. The move cleared the way to provide them with military support, antagonizing Western leaders who see such a move as a violation of world order, and sparked a frantic scramble by the United States and others to respond.

Underscoring the urgency, the UN Security Council held a rare overnight emergency meeting on Monday at the request of Ukraine, the United States and other countries. Ukrainian President Volodymyr Zelenskyy sought to project calm by telling the country: “We are not afraid of anything or anyone. We owe no one anything. And we will not give anyone anything.”

The White House issued an executive order banning U.S. investment and trade in breakaway regions, and additional measures — likely sanctions — were to be announced on Tuesday. These sanctions are independent of what Washington has prepared in the event of a Russian invasion, according to a senior administration official who briefed reporters on condition of anonymity.

RELATED: Ukrainian-Americans worry about the threat of war in their homeland

The developments came amid a spike in skirmishes in eastern regions that Western powers believe Russia could use as a pretext for an attack on Western-looking democracy that has defied Moscow’s attempts to drag it back into its orbit.

FILE – Russian President Vladimir Putin speaks during a joint press conference with the German Chancellor following their meeting on Ukraine’s security at the Kremlin in Moscow February 15, 2022. (Photo by MIKHAIL KLIMENTYEV/Sputnik/AFP via Getty Images

Putin justified his decision in a far-reaching pre-recorded speech blaming NATO for the current crisis and calling the US-led alliance an existential threat to Russia. Scanning over a century of history, he painted today’s Ukraine as a modern construction inextricably linked to Russia. He accused Ukraine of inheriting historical lands from Russia and, after the Soviet collapse, of being used by the West to contain Russia.

He later signed decrees recognizing the independence of the Donetsk and Luhansk regions, eight years after fighting broke out between Russian-backed separatists and Ukrainian forces, and called on lawmakers to approve measures paving the way for military support.

So far, Ukraine and the West have accused Russia of supporting the separatists, but Moscow has denied this, saying the Russians who fought there were volunteers.

At an earlier meeting of Putin’s Security Council, a group of senior officials argued for recognition of the regions’ independence. At one point, one of them made a mistake and said he was in favor of their inclusion in Russian territory – but Putin quickly corrected him.

Recognizing the independence of breakaway regions is likely to be popular in Russia, where many share Putin’s worldview. Russian state media published images of people in Donetsk launching fireworks, waving large Russian flags and playing the Russian national anthem.

Ukrainians in Kyiv, meanwhile, bristled at the decision.

“Why should Russia recognize (rebel-held areas)? If neighbors come to you and say, ‘This room will be ours’, do you care about their opinion or not? This is your apartment , and it will always be your apartment,” said Maria Levchyshchyna, a 48-year-old painter in the Ukrainian capital. “Let them recognize what they want. But in my opinion, it can also cause a war, because normal people will fight for their country.”

With approximately 150,000 Russian troops massed on three sides of Ukraine, the United States warned that Moscow had already decided to invade. Always, Biden and Putin tentatively agreed to a meeting brokered by French President Emmanuel Macron in a last ditch effort to avoid war.

If Russia intervenes, the meeting will be called off, but the prospect of a face-to-face summit has revived hopes in diplomacy to prevent a conflict that could cause massive casualties and huge economic damage across Europe, which is heavily dependent on Russian energy.

Russia says it wants Western guarantees that NATO will not allow Ukraine and other former Soviet countries to become members – and Putin said on Monday that a mere moratorium on Ukraine’s membership wouldn’t be enough. Moscow has also called on the alliance to halt arms deployments in Ukraine and withdraw its forces from Eastern Europe – demands flatly rejected by the West.

Macron’s office said the two leaders had “agreed in principle to such a summit”, which would be followed by a broader meeting that would include other “relevant stakeholders to discuss security and strategic stability. in Europe”.

US National Security Adviser Jake Sullivan, meanwhile, said the administration was always ready to talk to avoid a war, but was also ready to respond to any attack.

This agreement was resented by many Ukrainians who saw it as a surrender, a blow to the integrity of the country and a betrayal of national interests. Putin and other officials argued on Monday that Ukrainian authorities had shown no appetite for its implementation.

More than 14,000 people have been killed since conflict erupted in the industrial heartland of eastern Ukraine in 2014, shortly after Moscow annexed Ukraine’s Crimean peninsula.

Satellite images released on February 20 show the deployment of Russian armored vehicles in places as close as 15 kilometers, or about 10 miles, to the Ukrainian border. (Credit: Maxar Technologies via Storyful)

Potential flashpoints have multiplied. Sustained shelling continued on Monday along the tense line of contact separating the opposing forces. Unusually, Russia said it had repelled an “incursion” from Ukraine, which Ukrainian officials denied. And Russia has moved to extend military exercises in Belarus, which could provide staging ground for an attack on Ukraine’s capital, Kyiv.

Ukraine and separatist rebels have traded blame for massive ceasefire violations with hundreds of explosions being recorded daily.

While separatists accused Ukrainian forces of firing on residential areas, Associated Press reporters who reported on several towns and villages in Ukrainian-held territory along the line of contact only witnessed no noticeable escalation on the Ukrainian side and have documented signs of increased shelling by separatists who have destroyed homes and torn up roads.

Some residents of the main rebel-held city of Donetsk described sporadic shelling by Ukrainian forces, but said it was not on the same scale as at the start of the conflict.

Separatist authorities said Monday that at least four civilians have been killed by Ukrainian shelling in the past 24 hours, and several others have been injured. The Ukrainian military said two Ukrainian soldiers were killed over the weekend and another serviceman was injured on Monday.

Ukrainian military spokesman Pavlo Kovalchyuk insisted that Ukrainian forces were not fighting back. 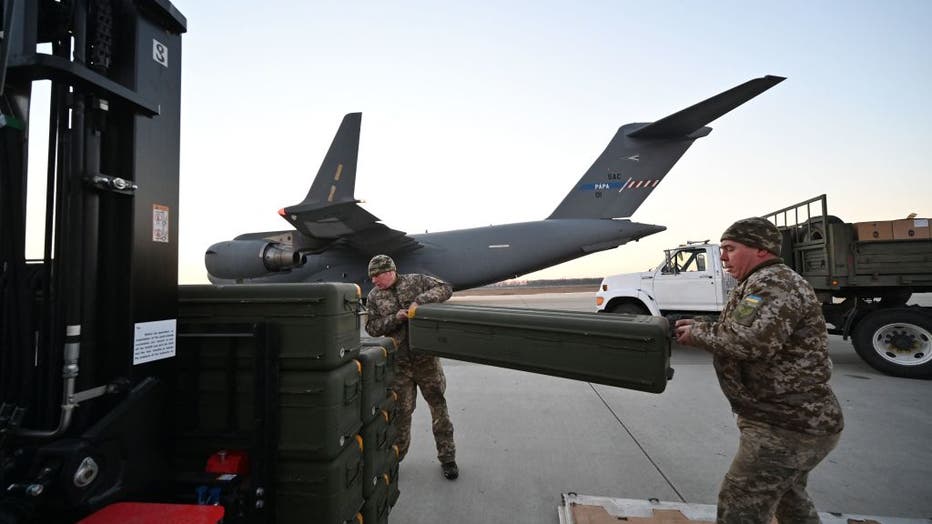 Servicemen of the Ukrainian Military Forces move US-made FIM-92 Stinger missiles, a man-portable air defense system (MANPADS), which functions as an infrared-guided surface-to-air missile (SAM), and the other military assistance shipped from Lithuania to B

In the village of Novognativka on the Ukrainian government-controlled side, Ekaterina Evseeva, 60, said the shelling was worse than during the height of fighting at the start of the conflict.

“We are on the verge of a nervous breakdown,” she said in a shaky voice. “And there’s nowhere to run.”

Amid heightened fears of invasion, the US administration sent a letter to the UN human rights chief saying Moscow had compiled a list of Ukrainians to be killed or sent to detention camps after the ‘invasion. The letter, first reported by The New York Times, was obtained by the AP.

Kremlin spokesman Dmitry Peskov said the claim was a lie and that no such list exists.

How to integrate renewable energies into the network? Northfield has an idea – Session Daily