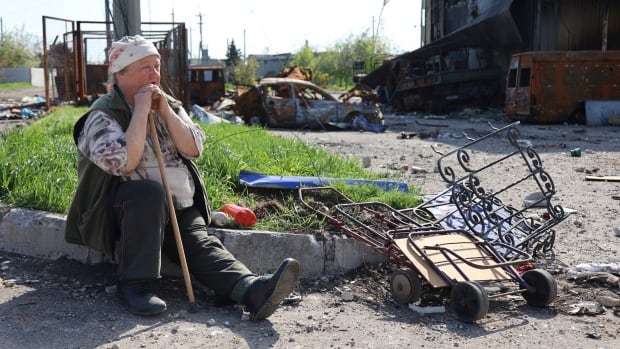 Ukrainians desperate for rescue in Mariupol as Russian advance delayed

Ukrainian forces fought on Saturday to delay a Russian advance aimed at capturing an industrial region in the east as well as Ukraine’s last stronghold in the southern city of Mariupol, where fighters and civilians hiding under a heavily damaged endure agonizing conditions.

The United Nations continued to try to negotiate an evacuation of civilians from the sprawling Soviet-era factory and other bombed-out ruins of Mariupol, a port city that Russia has sought to capture and has been subjected to heavy bombardment ever since. that it invaded Ukraine more than nine weeks ago. .

There are up to 1,000 civilians in the city’s Azovstal steelworks, according to Ukrainian officials, who did not say how many fighters remained in the part of Mariupol alone not occupied by Russian forces. The Russians estimated the number of Ukrainian soldiers at the plant at around 2,000.

Video and footage shared with The Associated Press by two Ukrainian women who said their husbands were among the fighters there showed unidentified injured men with stained bandages needing to be changed; others had open wounds or amputated limbs.

Treating wounded in a steelworks

Skeletal medical personnel were treating at least 600 wounded, said the women, who identified their husbands as members of the Ukrainian National Guard’s Azov regiment. The regiment is a far-right armed group that was integrated into the country’s national guard after the first Russian invasion in 2014.

In the video the women shared, the injured men tell the camera that they eat once a day and share as little as 1.5 liters of water a day between four. Supplies inside the surrounded facility have run out, they said.

The AP could not independently verify the date and location of the footage, which the women say was taken last week in the maze of passageways beneath the steel mill.

A shirtless man spoke with obvious pain as he described his injuries: two broken ribs, a punctured lung and a dislocated arm that “hung from the flesh”.

“I want to say to everyone who sees this: if you don’t stop it here, in Ukraine, it will go further, in Europe,” he said.

The Soviet-era steelworks has an extensive underground network of bunkers that can withstand airstrikes. But the situation worsened after the Russians dropped “bunker breakers” and other bombs.

Above ground, residents of Mariupol searched their ruined homes for their belongings and continued to cook in the streets on Friday. Furniture was piled outside burnt-out buildings as people ventured out in the spring sunshine, and explosions could be heard in the background.

Kindergarten teacher Natalia Kalugina, 64, was cooking curd pancakes on the street. She said she found the shelling frightening.

“I still can’t laugh. It’s just tears. My brother’s house was destroyed by shelling,” she said.

In the bombed city, around 100,000 people are believed to have been trapped with little food, water or medicine.

“Residents who manage to leave Mariupol say it’s hell, but when they leave this fortress they say it’s worse,” Mayor Vadym Boichenko said.

United Nations spokesman Farhan Haq said the organization was negotiating with authorities in Moscow and Kyiv to create safe passage.

This time, “we hope there is a little touch of humanity in the enemy,” the mayor said. Ukraine has blamed the failure of many previous evacuation attempts on continued Russian shelling.

Russia bombarded the Ukrainian capital of kyiv with missiles during a visit by UN Secretary General António Guterres. On the eastern front, Russian troops attempt to encircle and defeat Ukrainian forces beaten by heavy fighting. 2:34

Only minor gains for Russia

Getting a full picture of the battle unfolding in the east has been difficult as airstrikes and artillery barrages have made it extremely dangerous for journalists to travel. Ukraine and Moscow-backed rebels fighting in the east have introduced strict restrictions on reporting from the combat zone.

But so far, Russian troops and separatist forces appear to have made only minor gains.

Partly because of the strength of the Ukrainian resistance, the United States believes that the Russians are “at least several days behind what they wanted to be” as they attempt to surround Ukrainian troops at the is, said the top US defense official, who spoke on condition of anonymity to discuss the US military’s assessment.

As Russian troops attempt to move north out of Mariupol so they can advance on Ukrainian forces from the south, their progress has been “slow and uneven and certainly not decisive”, the official said.

Britain’s Ministry of Defense offered a similar assessment, saying it believed Russian forces in Ukraine were likely suffering from “weakened morale”, as well as a lack of unit-level skills and intelligence. “inconsistent air support”.

Russian forces have “been forced to merge and redeploy exhausted and disparate units from failed advances in northeastern Ukraine,” the ministry said in a tweet on Saturday as part of a daily war report. . She did not specify on what basis she made the assessment.

In his nightly video address, Ukrainian President Volodymyr Zelensky accused Russia of trying to destroy Donbass and everyone who lives there.

The constant attacks “show that Russia wants to empty this territory of all people”, he said.

WATCH | What happened in week 10 of the Russian attack on Ukraine:

What happened in week 10 of the Russian attack on Ukraine

Russia has warned the West of the outbreak of World War III if the leadership continues to intervene in Ukraine, while senior US and UN officials visited kyiv and assessed the horrors of the mass graves east of the capital. The Kremlin has also cut off natural gas to Bulgaria and Poland. Here is a recap of the war in Ukraine from April 23-29. 4:43

“If the Russian invaders are able to carry out their plans, even partially, then they have enough artillery and planes to turn all of Donbass to stone, as they did with Mariupol.”

Ukrainian troops in the Luhansk region of Donbass repelled an attack by Russian airborne troops and killed most of their unit, the governor said.

“Only seven of the invaders survived,” Governor Serhiy Haidai said on the Telegram messaging app on Friday. The request could not be immediately confirmed.

He did not specify where the attack took place, but said Russian forces were preparing for an attack on Severodonetsk, northwest of Lugansk.