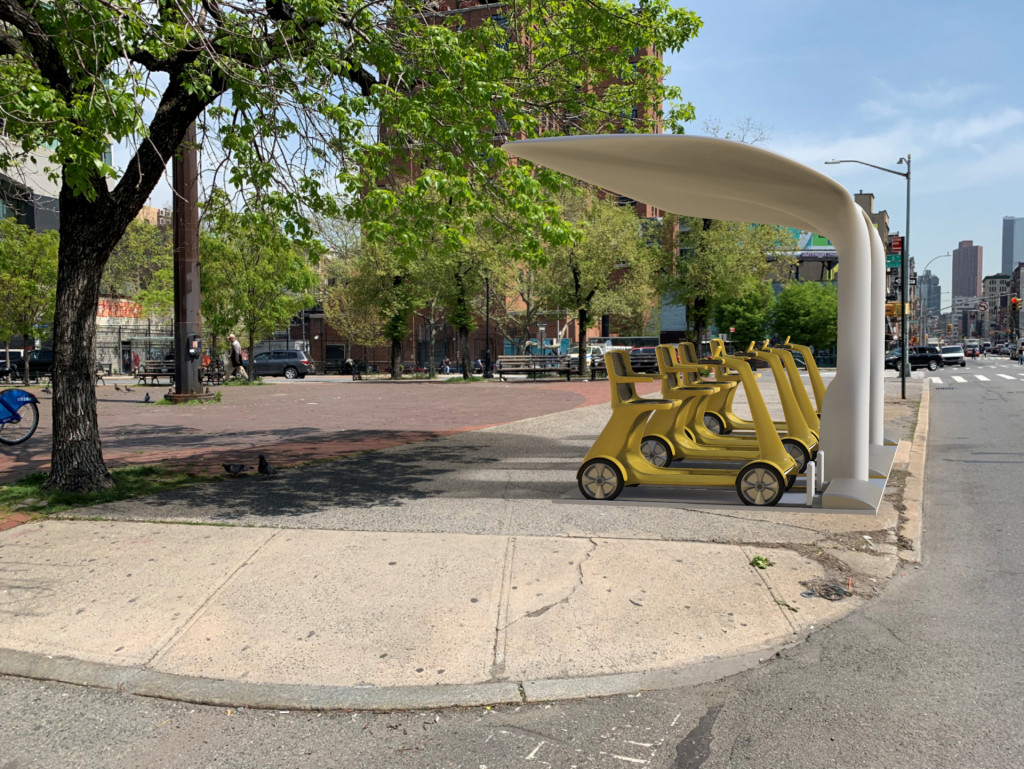 Gaps in medical care and potential improvements in health services are the challenges explored by students at the Pratt Institute in the medical prototype class led by Jeffrey Kapec, assistant professor of industrial design. Each student thinks about a product in health or medicine that could be improved or that does not even exist. These projects included yoga blocks for people with scoliosis, a shared scooter to improve mobility for the elderly, and a toothbrush for people with mouth aversions that can be used as part of occupational therapy. The process encourages students to use their design skills to make tangible improvements in people’s lives.

Each student builds a prototype medical device by hand as well as using a computer. “The computer is a very powerful tool,” Kapec explained. “However, in exploring design it’s important to understand how to do things by hand. This process is something that I really want them to get into their souls. With the Tanaka Kapec Design Group, Kapec has worked on everything from surgical instruments to pharmaceutical packaging and brings that expertise to its classroom.

Selin Miskavi, BID ’22, designed Rota, a set of adjustable yoga blocks and mat. “Throughout my childhood, yoga really helped me with my scoliosis,” Miskavi said. But despite research showing how some yoga poses have potential effectiveness In relieving the condition of the spine, companies making yoga accessories rarely consider, as Miskavi said, “that everyone’s spine is not the same.” So she worked with her childhood yoga therapist to design one herself.

“During my research, I have seen many people use pillows, folded blankets, pregnancy wedges, and other items to counter their scoliosis by realigning their bodies, as yoga blocks are generally very stiff, they were uncomfortable and painful, ”Miskavi said. The gentle forms of Rota allow users to gradually realign their bodies into beneficial poses that can relieve pain.

Enabling movement was also a goal for Thomas Chen, BID ’21, who designed a shared public scooter for the elderly or those with reduced mobility. The program would operate as a bike-sharing service, with docks centrally located to retiree communities, senior care facilities, parks and grocery stores. As Chen explained, the scooter “enables users to overcome their barriers to mobility by renting a scooter at an affordable price.”

Chen already intends to continue refining his prototype when he begins his graduate studies at the University of California, Berkeley, adding that “outdoor mobility is important for everyone.”

Seamus Gilmore, BID ’21, was inspired by the need for better daily support for people with generalized anxiety disorder. “A lot of treatments for anxiety currently rely on therapy, but there isn’t a whole lot of physiological things you can do to deal with anxiety,” said Gilmore. He decided to create a prototype wearable device, like “a smartwatch that wasn’t going to take up a lot of space and that wasn’t going to make you think about it all day.”

The device, called AutoStim, tracks the wearer’s pulse, heart rate and breathing and alerts when these readings are too low or too high. “It would be like the device telling you, ‘Hey, we noticed your pulse is rising, you’re hot,’ he explained. It would then send you prompts to take action. It also includes active vibration and cooling stimuli for the inside of the wrist which can be automatically triggered by the heart rate and skin temperature monitoring functions. “The goal of the project was to create a system that not only notices when you are stressed, but also steps in and tries to help the user defuse their anxiety symptoms,” said Gilmore.

For Andrew Lee, BID ’21, the design inspiration was his training as a lifeguard and his instinct that there was a way to improve the way seaside lifeguards save people in open water. Specifically, he wanted to create a device that would give lifeguards more freedom, flexibility, and the ability to use all of their limbs while saving swimmers.

His project consists of two sections, a harness for the rescuer and an inflatable flotation device for the person in danger. “The rescuer wears the life jacket that clips onto the captive flotation device while on his way to the rescue,” Lee said. “They can then loop the flotation device around the neck and chest of the immobile or unconscious swimmer and swim to shore for immediate medical attention.” This leaves the rescuer’s hands and legs free to swim, allowing the victim to help more quickly.

Two students tackled the toothbrush makeover. Anjani Alayo Santos, BID ’21, took inspiration from a podcast on occupational therapy tools for visually impaired children to create what has become Hoto, a toothbrush for children who have oral aversions and who do not therefore do not brush their teeth. “The end product,” she said, “is a toothbrush with interchangeable heads that will be modified according to the comfort level of the patient.”

She added that a particularly valuable part of the class was connecting with specialists for their ideas. “One key thing that I discovered while talking to an occupational therapist was that the familiarity developed between the user and the product was something that required a lot of effort on the part of the user, so the introduction of a completely different object made the process of establishing a routine more difficult. She explained, which resulted in the Hoto design which has a traditional grip but with a different head.

Hector Brignone, MID ’22, meanwhile, designed Chek, which he explained “is a toothbrush and subscription service that provides its users with an in-depth analysis of their oral and physical well-being through a familiar tool. Chek combines the healthy habit of replacing your toothbrush every three months with salivary diagnoses, bringing preventative care to everyone’s homes.

Brignone especially appreciated the way the students worked with Kapec in the studio to give each other their opinions and refine their designs, as they would in a professional setting. “Reviews became design team meetings where we all worked together to steer each other’s projects in the right direction,” said Brignone. “It was an eclectic design studio of graduates and undergraduates with projects in all areas of medicine.”

Gui Mu, BID ’19, who designed the V Cup, a urinalysis cup holder designed for female patients, concurred with this opinion. “This was the first time I had to ‘design’ the design process myself, in other words, determine what kind of research is needed for the project and what direction will be the optimal solution for the design challenge.

Preparing students for their professional practices is Kapec’s goal. “It’s a process where I start showing them how they take different skills and merge them together like a professional would, like someone in practice would solve a problem for a client.”

Student work in industrial design: a bamboo washing machine in the river