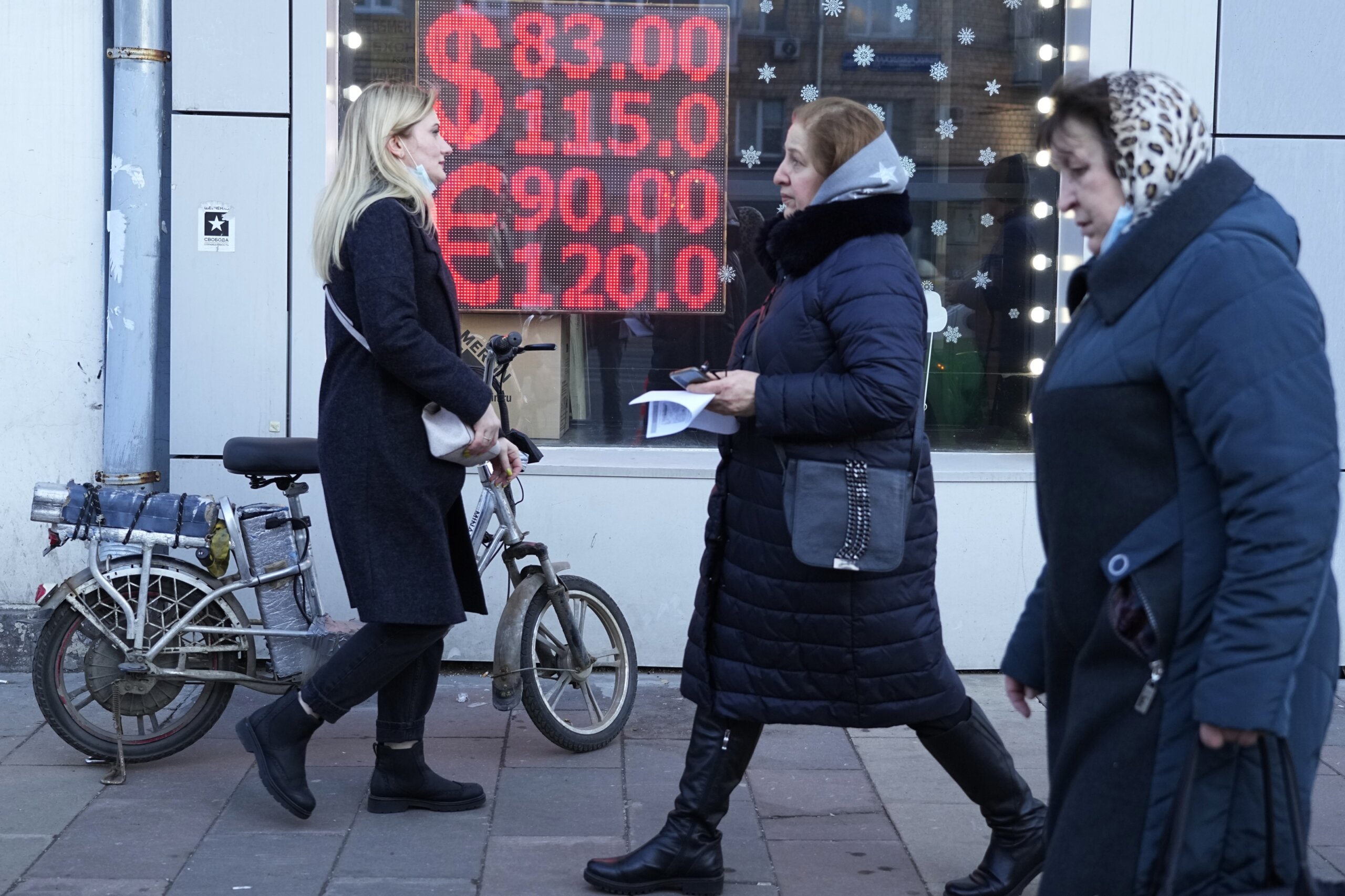 WASHINGTON (AP) — The ruble is no longer rubble. On Wednesday, the Russian ruble rebounded after its fall…

WASHINGTON (AP) — The ruble is no longer rubble.

On Wednesday, the Russian ruble rebounded from the fall it suffered after US and European allies decided to bury the Russian economy under thousands of new sanctions following its invasion of Ukraine. Russian President Vladimir Putin has resorted to extreme financial measures to ease Western sanctions.

As the West imposed unprecedented levels of sanctions on the Russian economy, the Central Bank of Russia raised interest rates to 20% and the Kremlin imposed strict capital controls on those wishing to trade their rubles against dollars or euros.

It’s a monetary defense that Putin may not be able to sustain as long-term sanctions weigh on the Russian economy. But the ruble’s recovery could be a sign that sanctions in their current form are not working as powerfully as Ukraine’s allies hoped when it comes to pressuring Putin to withdraw his troops from Ukraine. .

The ruble was trading at around 85 to the US dollar, roughly where it was before Russia began its invasion a month ago. The ruble had fallen to around 150 to the dollar on March 7 when news emerged that the Biden administration would ban US imports of Russian oil and gas.

“The only way to urge Russia to seek peace is through sanctions,” Volodymyr Zelenskyy said in a video message from his beleaguered country. He added: “The stronger the sanctions, the sooner we will bring peace.”

Increasingly, purchases of Russian oil and natural gas by European nations are being scrutinized as a loophole and a lifeline for the Russian economy.

The ruble rose amid reports that the Kremlin has been more open to ceasefire talks with Ukraine. US and Western officials have expressed skepticism about Russia’s announcement of a recall of operations.

President Joe Biden promoted the success of the sanctions – among the toughest ever imposed on a country – while in Poland last week. “The ruble is almost immediately reduced to rubble,” Biden said.

Russian efforts to counter these sanctions by supporting the ruble can go no further.

The Central Bank of Russia cannot continue to raise interest rates, as this will eventually stifle credit to businesses and borrowers. At some point, individuals and businesses will develop ways to circumvent Russian capital controls by transferring money in smaller amounts. As the sanctions depress the Russian economy, economists say this will eventually weigh on the rouble.

But Russian oil and gas exports continued to Europe as well as to China and India. These exports have served as the economic base of the Russian economy, which is dominated by the energy sector. In the European Union, a reliance on Russian gas for electricity and heating has made it much more difficult to turn off the tap, something the Biden administration did when it banned the relatively small amount of oil that states United import from Russia.

“The US has already banned imports of Russian oil and natural gas, and the UK will phase them out by the end of this year. However, these decisions will not have a significant impact unless and until the EU follows suit,” wrote Benjamin Hilgenstock and Elina Ribakova, economists at the Institute of International Finance, in a published report. Wednesday.

Hilgenstock and Ribakova estimate that if the EU, Britain and the United States ban Russian oil and gas, the Russian economy could shrink by more than 20% this year. This is compared to projections of a contraction of up to 15%, under the current state of sanctions.

Knowing this, Putin has largely leveraged Europe’s dependence on its energy exports to his advantage. Putin has called on Russia’s Central Bank to force foreign gas importers to buy rubles and use them to pay state gas supplier Gazprom. It is unclear whether Putin can carry out his threat.

The White House and economists have argued that the impact of sanctions takes time, weeks or months to be fully effective, as industries shut down due to a lack of materials or capital or both. But critics of the administration say the recovery of the ruble shows the White House needs to do more.

“The ruble’s rebound would seem to indicate that US sanctions have not effectively crippled the Russian economy, which is the price Putin should have to pay for his war,” said Sen. Pat Toomey, R-Pa.

“To give Ukraine a fighting chance, the United States must cut off Putin’s revenue stream by cutting off Russian oil and gas sales to the world,” Toomey said in an email. ‘Associated Press.

Sen. Sherrod Brown, chairman of the Senate Banking, Housing and Urban Affairs Committee, said Wednesday that lawmakers are considering ways to extend sanctions recently imposed by Biden on members of the Russian parliament “and likely extend them to other political actors”. Brown, D-Ohio, said lawmakers are also weighing more sanctions against banks.

Western leaders, encouraged by Biden, have adopted sanctions as their toughest weapon in an attempt to coerce Russia into reversing its invasion of Ukraine, which is not a NATO member and is not protected by the bloc’s mutual defense policy.

Some of the allies now recognize that their governments may need to step up financial sanctions against Russia.

British Prime Minister Boris Johnson said on Wednesday that the major industrial nations of the Group of Seven should “escalate sanctions with a rolling program until every one of (Putin’s) troops is out of Ukraine.”

But it’s a tougher demand for other European countries like Germany, which depend on Russia for vital natural gas and oil. Overall, the EU gets 10% of its oil from Russia and more than a third of its natural gas.

Many of these countries have committed to weaning themselves off this addiction, but not immediately.

He noted that “such an outcome might be beyond the reach of the Western consensus.”

Copyright © 2022 The Associated Press. All rights reserved. This material may not be published, broadcast, written or redistributed.

Industrial technology and witchcraft cast a 1.68 million spell on investors