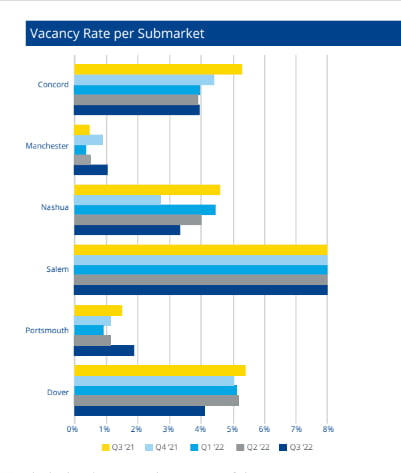 The low amount of industrial space available in New Hampshire has reduced vacancy rates, but not for office buildings, although rates in this market appear to be stabilizing.

The statewide vacancy rate for industrial spaces — which includes manufacturing, flexibility/research and development, and warehouse/distribution — was 3.1% in the third quarter, according to market analysis. prepared for Colliers International by Kristie Russell, its New Hampshire Research Manager. and Maine.

A separate report from Russell that looked at the office market showed a statewide vacancy rate of 11.2% in the third quarter. Vacancies started to climb just over 8% after Q3 2020 the onset of the Covid-19 pandemic, reaching well above 11% in Q3 2021 before falling slightly this quarter.

“Industrial space continues to be hard to come by with an overall vacancy rate hovering around 3% over the past four quarters,” Russell noted in his report. “Since its initial descent during the second quarter of 2020, vacancy has stabilized with a 0.4% decline over the past year due to limited availability.”

Industrial space is occupied almost as soon as it is vacated, she writes. The other problem, she noted, is that some older industrial spaces are simply not suited to the needs of a modern manufacturing company. Often, the older space “doesn’t have the electricity it needs, it doesn’t have loading docks, drive-through doors, none of that.”

After posting negative absorption in the second quarter of 2022, the absorption rate increased in the third quarter by nearly 135,000 square feet.

The law of supply and demand was also at work in the industrial market. Rents are measured by something called triple net (NNN). On an NNN lease, tenants pay additional expenses per square foot, on top of the rental fee. NNN fees include property taxes, property insurance, and maintenance fees for common areas of a building.

One of the most active investors in the market, according to Russell’s report, is the Burlington, Mass.-based RJ Kelly Company. She noted that she acquired 18 properties in the last quarter.

In August, she said, RJ Kelly was involved in separate transactions involving the purchase of 14 properties totaling 745,500 square feet for $90 million, with an average selling price of $118 per square foot. Properties are in Amherst, Hudson, Londonderry, Manchester, Nashua and Salem.

One of Kelly’s acquisitions – 121 Technology Drive in Durham – will temporarily house Sig Sauer while the Portsmouth-based gunmaker’s space in Rochester is upgraded to accommodate its new $4.5 billion deal on 10 years with the US Army to produce its new generation weapons and ammunition.

Kelly paid $21 million in October 2021 to buy the 500,000 square feet of office and manufacturing space in Durham, with high-ceilinged warehouse space and a total area of ​​over 170 acres that would allow for expansion. additional. The space was originally built by printing press manufacturer Goss.

Russell noted that Sig Sauer will occupy 123,890 square feet when renovating its manufacturing space on Amarosa Drive in Rochester.

An example of a more modern and much-needed industrial space is a project jointly proposed by The Kane Company and Procon at the Pease International Tradeport. In October, they announced plans to build a “state-of-the-art manufacturing facility development” on an 11-acre site along New Hampshire Avenue at the Tradeport. A 209,750 square foot building is proposed for the site.

On the general ledger office side, the total square footage of inventory has not changed significantly over the past year. The current 23,825,000 square feet marks no change from the second quarter and is slightly lower than the 23,875,000 square feet in the third quarter of 2021. 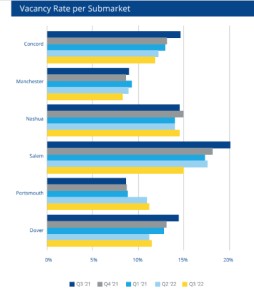 In Russell’s analysis, the 11.2% rate is welcome news as it shows stabilization after the pandemic kept workers at home, doing their jobs remotely for nearly two years.

“Thanks to Covid, the vacancy rate has jumped so much; it went from about just over 8% to 11%. So obviously it’s a big change,” Russell said. “For four quarters, it’s practically the same vacancy rate. So it’s not going any higher right now, which is good news.

Even though the demand for office space was weak, prices did not drop.

“Over the past year, we have commented on how asking rents have increased along with vacancy. In a typical market, the supply and demand rule would mean that as vacancy would go up, the rent would soon start to come down. That hasn’t been the case in any of the areas,” Russell said.

Commercial office rental for the Colliers Report is measured in MG – modified gross – with the tenant and landlord sharing responsibility for paying certain property expenses.

Much of the office space in the Portsmouth submarket is concentrated at the Pease International Tradeport, where its chief executive, Paul Brean, sees the difference the shift to a hybrid workforce has made.

“We don’t know if we’re going to see 11,000 employees returning to Tradeport daily. We have companies – obviously our biggest tenants Sig Sauer and Lonza – they need to have their people here 24/7 for on-site manufacturing,” Brean said. “But we have a number of more conventional office workers that companies are recognizing that you have to allow some type of telecommuting or hybrid to be competitive in order to retain people and recruit people.”

He said the need lies in the type of makerspace offered by Kane and Procon.

“They’ve also really looked at the market and they recognize that there’s such a demand for advanced manufacturing warehouse space; that’s where the value of that real estate is right now,” he said.

Russell noted in his office report that one of the biggest office deals to take place in the past two years was the sale of 100 Domain Drive to Exeter.

The 263,500 square foot multi-tenant Class A office building was purchased by Massachusetts-based Torrington Properties for $46.9 million ($178 per square foot). The building was around 70% occupied at the time of the sale to tenants including Bauer Hockey, FH Cann & Associates, Digital Prospectors, Garnett Hill and Vapotherm, which recently announced plans to close its manufacturing operations in Exeter.

ConvenientMD opened its first walk-in urgent care center in 2012 and in 2016 moved its base of operations to 111 New Hampshire Ave. at Tradeport. Last quarter, according to the Russell Report, ConvenientMD announced plans to move its headquarters to a new commercial building at West End Yards in Portsmouth.

With the company moving later this year, freeing up 10,600 square feet, a lease for space in the building has been signed by Optima Dermatology, which was founded last year by Max Puyanic, also one of the original founders of ConvenientMD.

According to Puyanic, the company’s offices will occupy the second floor, from June or July next year, moving out of their existing space on Heritage Avenue in Portsmouth. Part of the first floor is being renovated to accommodate Optima’s new pathology laboratory.

“We need bigger office space – what we call our practice support center,” he said. “And we’re building a new state-of-the-art pathology lab that would serve all of our practices. We hired a really talented person to run this for us. And then we have pathologists lined up.

Russell’s report says Optima has also leased space at 25 Pelham Rd. in Salem pending its new 10,200 square foot facility at Gateway Park in Windham. Scheduled to be completed in 2023, it is the second stand-alone building under construction for Optima. It is also constructing a 10,000 square foot building in Stratham. Puyanic also said the company is opening a new facility in Bedford.