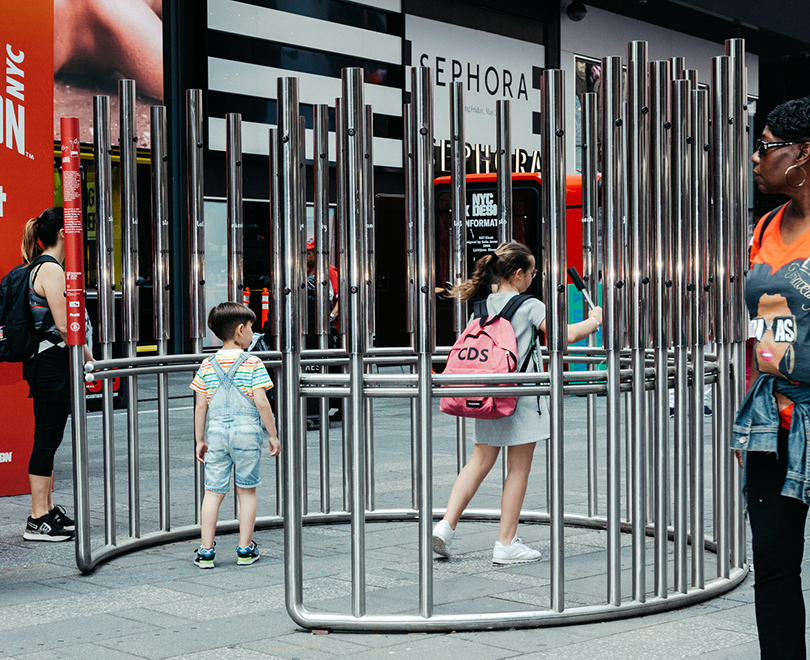 Their project, HOURRA!, is an interactive musical installation inspired by a commission from the Polish Cultural Institute and the Embassy of the Republic of Poland in Washington, DC, to commemorate 100 years of diplomatic relations between Poland and America. Members of the design team included Murlak, the author of the project by Pratt Faculty; designer Marzena Krupa, who initiated it; graduate student in industrial design Begnaud; and Kasia Michnowska, a student at the Academy of Fine Arts in Łódź, Poland.

HOURRA! made its New York City debut at the 2019 Design Pavilion in Times Square during NYCxDESIGN, the city’s annual design festival, held in May. Murlak and Begnaud discussed the project as it moved into a second phase in DC, where the facility will be viewable and open for play until September 2020.

DANIELLE BEGNAUD: The project has a few themes, but something that kept coming back was the music, how it is strongly linked to Polish culture, but also how it can connect people and create joy.

KAROL MURLAK: The key word is joy. The diplomatic relationship [this celebrates] relates to the daily life of Poles in America, so we thought he must be very close to people. We watched how people celebrate birthdays in their daily lives, and it was clear that in Poland and America when we celebrate birthdays we celebrate with song and music. Joy, happiness, and celebration are equal to music and sound.

BD: We imagined what we would like the project to look and sound like based on a complete lack of knowledge of music. The iterations sought to make different notes [to play the Polish celebratory song “Sto Lat”], and shape the structure based on the information we discovered as we went along.

KM: Sound was our main medium. It’s a three-dimensional installation, but what we wanted people to remember was the music, not the form. At the same time, as designers, we are trained to satisfy human eyes, not so much the ears. It was actually pretty exciting having this idea that we all loved, and our main struggle was to find a way to make it workable, which is a big part of the design work anyway. We spent many hours in our manufacturer’s workshop in Brooklyn Stainless Steel, he became one of our experts.

Hannah Fink, MID ’20, also contributed her expertise as a metallurgist, and Alice Hixon Kirk, MID ’19, was consulted on the project as a trained musician. Part of the expertise Begnaud brought was his experience in designing for play and fun.

KM: When you finally see that thing being used, and when you see people smile when they use it, there’s that moment when you know you’ve been successful in accomplishing something – it’s not about the product, it’s about it. it is about what happens between the product and the human being who uses it. At the same time, it’s a great learning opportunity, when you see that there are things you could have done better.

BD: One of the things that we observed – we tried so hard to control the situation so that everyone played the song the same and it came out like a music box. We put stickers on the floor, told you what to do with your hands, showed you where to hit each tube, in what order to hit the tubes, how far each one should be in time. But something that I have observed is that people are just going to play it the way they want. Regardless of our motivations, they felt joy and kind of let go to make their own version of the song.

KM: This project is part of Design Clinic. The idea behind Design Clinic, when Constantin Boym [Chair of Industrial Design] was creating it, was that it would be a very different way of educating students, exposing them to real life projects and situations. This is the main conclusion that I hoped this project would give.

BD: It helped me realize that projects this quick, this real, and this big are possible. You really just have to break things down and Google things up and call people up and figure it out, just keep moving. Also, a personal thing: Kasia had been working on this project with us the whole semester from Poland and she came at the end for the installation and stayed with me. Personally, that was the highlight of the whole project, making friends through this celebration – I thought it was a lovely poetic ending.

Main trends in industrial design: from green engineering to the cloud and beyond