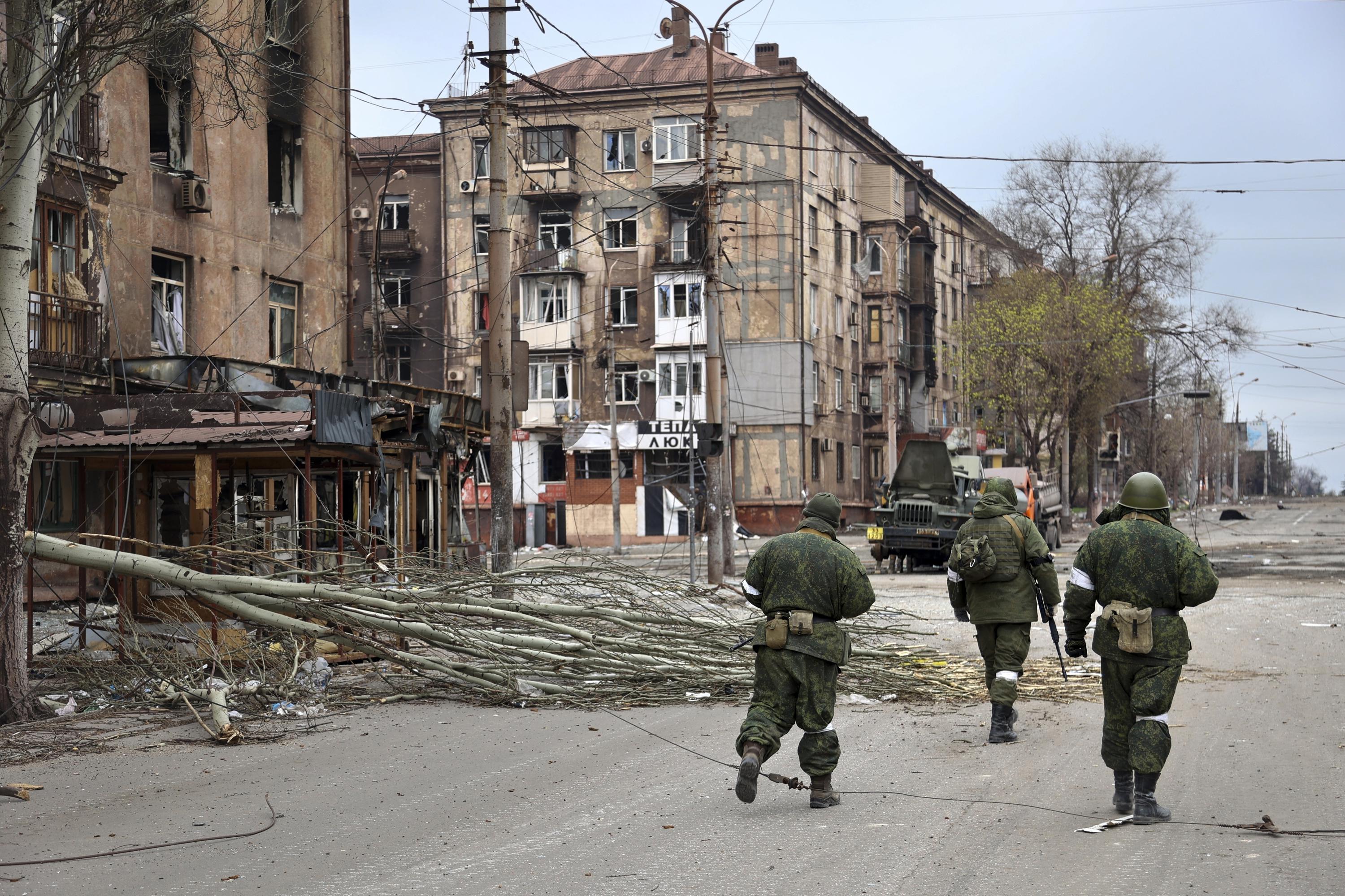 EXPLAINER: Why the Battle for the Mariupol Steel Plant Matters

Russian President Vladimir Putin claims control of the Ukrainian port city of Mariupo l even as its defenders still hold out in a giant steel mill by the sea.

His statement reflected the city’s importance on the Sea of ​​Azov and appeared to be an attempt to declare victory without storming the last pocket of Ukrainian resistance there: the massive Azovstal factory.

WHY IS MARIUPOL IMPORTANT?

Mariupol, part of Ukraine’s eastern industrial region known as Donbass, has been a key Russian target since the start of the Feb. 24 invasion. Capturing the city would allow the establishment of a land corridor between the Russian border and Ukraine’s Crimean peninsula which Moscow annexed in 2014. It would also deprive Ukraine of a major port and valuable industrial assets.

The seven-week siege has tied down significant numbers of Russian forces, which are essential for an offensive elsewhere in Donbass. It is in this region that Moscow-backed separatists have been fighting Ukrainian government forces since 2014, after the annexation of Crimea.

HOW DID THE RUSSIAN SIEGE GO?

Since it began on March 1, the Russian military has relentlessly pounded Mariupol with artillery barrages and air raids, leveling most of the once bustling city. The indiscriminate bombardment hit homes, hospitals and other public buildings, killing thousands. This includes around 300 people killed in an airstrike on the Mariupol Drama Theater which served as a shelter, with officials writing the Russian word for “CHILDREN” in huge white letters on the pavement outside.

Mayor Vadym Boychenko told The Associated Press that at least 21,000 people had been killed in Mariupol, with bodies “lying in the streets”. He said Russia had deployed mobile cremation equipment to methodically dispose of the remains to destroy evidence of the massacre and prevent international organizations from documenting “the horror for which the Russian military is responsible”. He said bodies had also been dumped in mass graves outside the city.

HOW DID UKRAINE RESPOND?

Ukraine has concentrated some of its best troops to defend Mariupol. They include the 36th Marine Brigade, Interior Ministry troops, Border Guards and the National Guard Azov Regiment. The regiment is a seasoned volunteer force that is widely regarded as one of Ukraine’s most capable units and has been singled out by Russia as a particular villain due to its far-right ideology.

Moscow has deployed fighters from Chechnya, known for their ferocity, to fight street battles in Mariupol. Moscow-backed Chechen leader Ramzan Kadyrov has repeatedly bragged on social media that he defeated the Ukrainians in Mariupol, but the fight continued.

After weeks of house-to-house battles in which Russia suffered massive casualties, including several senior officers, Mariupol’s defenders dug themselves into the last remaining pocket of resistance – the gigantic Azovstal factory which employed 10,000 workers before the war.

WHY HAS THE BATTLE FOR THE STEEL PLANT LAST SO LONG?

According to Moscow’s estimates, a few thousand Ukrainian soldiers remained at the factory, which covers an area of ​​nearly 11 square kilometers (more than 4.2 square miles). Ukrainian President Volodymyr Zelenskyy said around 1,000 civilians were also trapped in the plant.

Azovstal has a 24 kilometer (15 mile) maze of tunnels and underground passages, which allowed its defenders to maneuver freely to repel Russian attacks.

Before the war, the Ukrainian authorities prepared for the Russian offensive by stockpiling food and water in Azovstal.

“Azovstal is very difficult to storm, and the Russians risk losing a lot of troops, resources and, most importantly, time there,” Zhdanov said. “It’s a city within a city, and the fighting there could take months.”

He added that “as long as Mariupol holds, the Russians will not be able to redeploy 10 to 12 of their elite units to other parts of eastern Ukraine”.

The city “continues to distract the Russian armed forces and thwart the Kremlin’s plans for an offensive in Donbass”.

HOW DOES PUTIN REPRESENT THE BATTLE FOR MARIUPOL?

Putin met with Defense Minister Sergei Shoigu on Thursday, who said the entire city except Azovstal was now under Russian control. It would take three to four days to drive the Ukrainian troops out of the steelworks, he added.

In a tightly choreographed televised meeting, Putin praised the military, saying “bringing such an important center in the south like Mariupol under control is a success.”

At the same time, he ordered Shoigu not to send troops into Azovstal to finish off the resistance, in order to avoid casualties. Instead, the factory would be hermetically sealed “so that not even a fly would pass through”.

The remarks appeared to reflect Putin’s bid to claim victory without a bloody, all-out assault on the factory in hopes that his defenders would surrender after running out of food and ammunition. Putin said nothing about stopping a bombardment of the factory, which is likely to continue.

HOW DOES UKRAINE REACT?

Retired British Rear Admiral Chris Parry described Putin’s remarks as a sign of a change in approach, observing that “the Russian agenda is no longer to capture these really difficult places where Ukrainians can fit in urban centers, but to try to capture territory and also to surround Ukrainian forces and declare a huge victory.

Parry compared Ukrainian resistance in Mariupol to the Battle of Stalingrad, in which the Red Army routed the Nazis blockading the city at a key turning point in World War II.

“I think there’s great totemic value in the Ukrainians clinging to Mariupol,” Parry said. “If the Ukrainians can hang onto it…raised to the level of Stalingrad, then I think it’s going to be a major lever for them both in the propaganda war, but also on the ground as well.”

Commanders of Ukrainian units at the plant have been making a series of desperate video calls in recent days, saying they are hanging by a thread and asking for help.

Major Serhiy Volynskyy of the 36th Marine Brigade said in a video on Wednesday that “we are probably facing our last days, if not hours,” adding that “the enemy is outpacing us 10-1.”

Zelenskyy said around 1,000 civilians could take refuge in the plant and that “we are open to different formats of exchanging our people for the Russian people, the Russian military that they left behind.”

But he added that Russia had blocked Ukraine’s attempts for a negotiated exit.