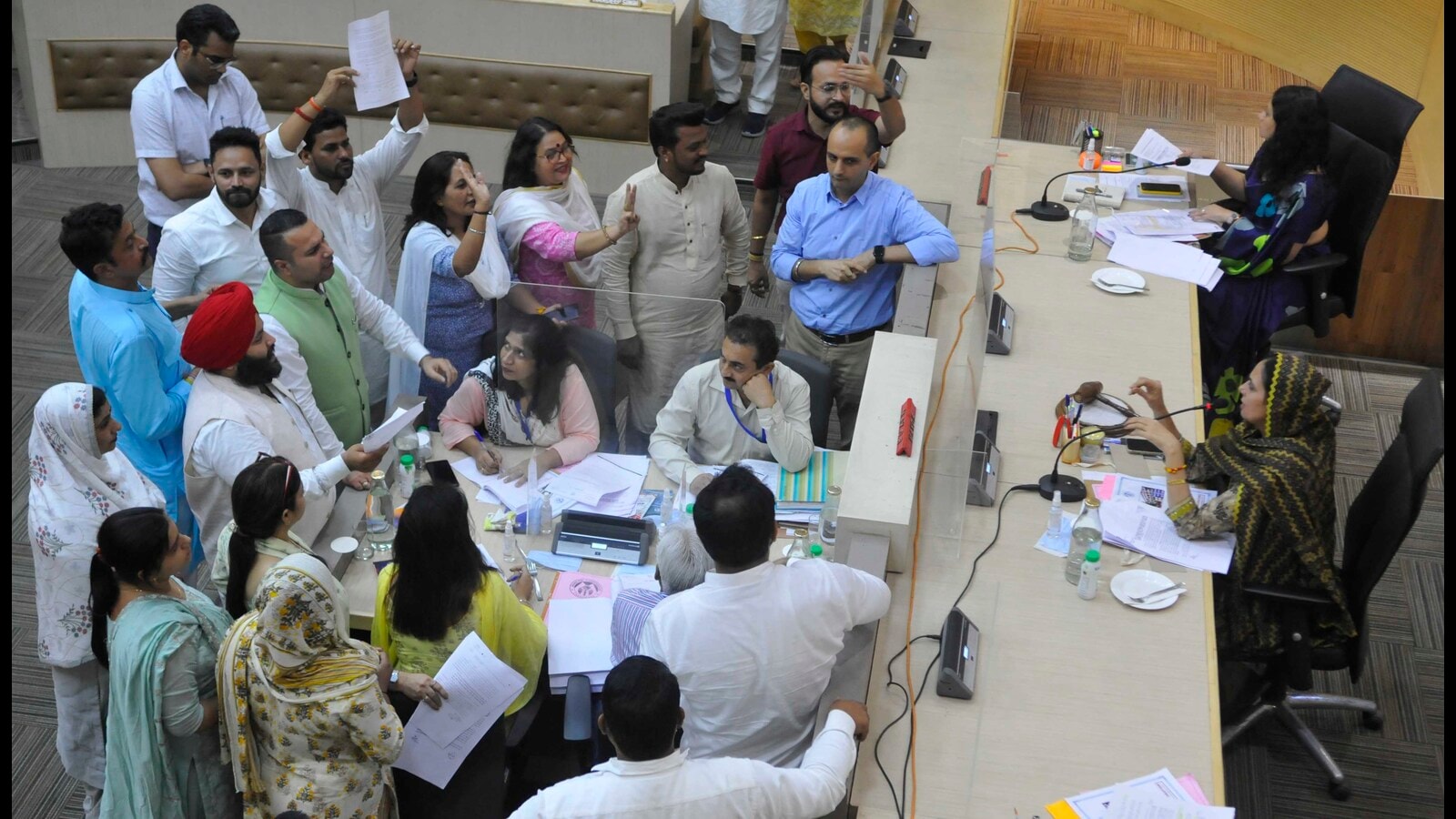 Even as all the development proposals were passed unanimously at the general assembly of the Chandigarh Municipal Corporation on Thursday, councilors from the Bharatiya Janata Party (BJP) and the Aam Aadmi Party (AAP) clashed over the agenda for setting up a new 50-bed hospital. .

Two separate agendas were submitted for House approval. While the BJP agenda proposed building the hospital in Ward 14, the AAP agenda demanded that it be brought up in Ward 15, both of which come under Dhanas.

AAP advisers stormed the House well, stalling the proceedings for more than an hour, as they alleged that the BJP-led MC was moving the proposed hospital from the neighborhood of an AAP adviser. ‘AAP to that of a BJP adviser.

Meanwhile, BJP advisers have claimed that vacant land was previously available on land reserved for a gaushala, whose plans have now become redundant as the Dhanas dairy settlement has been converted into residential houses.

Councilors from both parties had written to the mayor demanding the construction of the hospital in their neighborhood.

The discussion quickly turned heated. Trying to pacify the situation, Mayor Sarabjit Kaur said the final decision will be taken by the administration, and they will look at the three sites. AAP advisers demanded a vote, but both agendas were eventually postponed.

The House approved the agenda for widening of Sector 14/25 separating the road from T-junction 23 to Dhanas village. The single lane road will be widened to a four lane road. A roundabout will also be installed near the Chitkara school for better traffic flow. The project also includes the construction of a bicycle path, a pedestrian path on both sides and a slow-moving lane on one side.

The 500 meter project will be carried out at the cost of ₹2.90 crore and take three to four months for completion. It is likely to start after the monsoons.

The road coming from roundabout 14/25 is four lanes. But, it suddenly turns into a single lane road. A lot of traffic enters the road from Dhanas and this leads to frequent traffic jams.

A small oval-shaped roundabout is also given by CAUT at the junction near Chitkara School and Dhanas Road to regulate traffic coming from PGI and Udyog Marg side.

The House also approved the purchase of 3,269 two-tone bins for neighborhood parks, green belts and the attachment of twin bins at a cost of approximately ₹2 crores.

The re-carpeting of various roads and the parking lot in the Phase-1 industrial zone was also approved. Similarly, the programs to reconstruct the existing PCC tiles along the V-6 road in Ram Darbar and to repair the damaged footpath on various roads in Manimajra also received the approval of the House.

As the Chandigarh MC’s lofty claims of monsoon preparedness fall flat, the issue of large-scale waterlogging rocked the House’s general assembly on Thursday.

Mocking MC’s efforts to prevent waterlogging, AAP councilor Prem Lata said a rainy day had created ponds all over the city. Lata, while lashing out at MP Kirron Kher, Mayor and BJP councilors, said, “Instead of going boating to Sukhna Lake, come to my area of ​​Sector 35 and go boating the low.” She threw a paper boat at BJP advisers while making her point.

Notably, just a day earlier, MC had claimed that over 85% of road ravines had been cleared ahead of the monsoon. “The large-scale waterlogging has exposed the MC,” Congressman adviser Gurpreet Singh Gabi said.

Councilors also demanded Kher’s resignation and shouted slogans against her as they stood in the well of the house. They also demanded the determination of responsibility and action against negligent officials.

MC’s Chief Engineer, NP Sharma, said, “The city’s sewerage and stormwater drainage system can handle 20-30mm of rainfall in a short period of time, and under such conditions, it will not takes only 30 minutes for the water to drain. There was 68.2 mm of rain from 8 a.m. to 11 a.m. Thursday, which took longer.

MC Commissioner Anindita Mitra said that MC is upgrading and expanding the capacity of the sewage and drainage system. She added that MC has been constantly cleaning and repairing road ravines for the past three months.

Later, in a press release, an MC spokesperson said: “To deal with the situation, personnel from 18 flood teams drained water from some low-lying areas using sets of suction pumps/machines”.

Katyal said, “Sanitation work in the EWS settlement in Sector 32-C had not been completed for six months. I called a public meeting and asked the SDO to attend. Despite the assurance, neither he nor the junior engineer showed up and they kept the audience waiting. However, executive engineer Vijay Premi came later to save face.