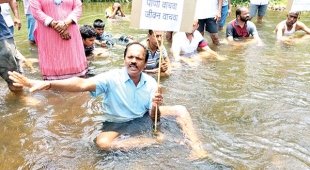 Only “Jal Andolan” to oppose a pumping station that will release water for Mopa airport and the industrial zone of Tuem, MLA promises to meet with WRD officials to better “understand” the project

PERNEM: In a commotion unlike any other in Pernem’s history, farmers, villagers and social activists staged Jal Andolan (anti-water protest) on Sunday in Bailpar, Casarvane village, demanding the government to to stop the ongoing works of a new pumping station, alleging that the project is completely illegal and that when completed will affect the water supply of Pernem taluka as a whole.

For nearly 5 hours, protesters stood and sat in the water in protest. The protesters, including villagers from Casarvane and Bailpar, Baburao Gad, Uday Mahale, farmer Vithu Naik, women, youths and even young children, were supported by Swapnil Sherlekar, lawyer and social worker Prasad Shahapurkar and several others participated in the demonstration.

The protest continued until the arrival of Pernem MP Pravin Arlekar, who told the villagers that he would meet with the Department of Water Resources to understand the purpose of the project. Arlekar said that if he concludes that the project is not in the interest of the people of Pernem, he will stand with them and oppose it.

Adv Prasad Shahapurkar said, “We want the project to stop. Our Jal Andolan is to make the people of Pernem taluka aware of how this project will harm the taluka,”

Shahapurkar further informed that in a meeting held with officials, people were informed that WRD is providing water supply for the month of October. This pumping station will discharge water from the river into the Tillari channel during these months. Along with this, water will be pumped for irrigation, Tuem Industrial Zone and Mopa Airport. “Mopa airport, he said, asked for 4.5 MLD of water but the government is ready to give 5 MLD. This project arrives at Bailpar because it is close to these projects. This problem will not only affect the villages in this area but the entire Pernem taluka,” Shahapurkar added.

For several months, the villagers, especially the farmers, have been fighting to stop the ongoing work of the pumping station on the banks of the Bailpar river. The estimated cost of the project is Rs 26 crore. “Taxpayers’ money is wasted and this project will seriously affect the water supply for the whole taluka of Pernem,” said Uday Mahale, a villager.

“A 15 MLD factory exists. Work on another 15 MLD plant is also underway. If the government wants to provide a better water supply to the people, instead of increasing the plant by another 15 MLD, it should increase the capacity. These two plants will pump water from the Bailpar River, so what is the need for this third pumping station? This third pumping station is to discharge more water into the Tillari Canal in order to provide water for the companies’ projects. If three factories keep pumping water, the river will dry up,” said Baburao Gad, another villager.

Meanwhile, another main reason for the protest is that neither the villagers nor the panchayat were given confidence before starting the project works. “Just because it’s a government project doesn’t mean people are going to accept it. Environmentally harmful projects will be challenged. What is the purpose of this pumping station and what is the guarantee that it will not affect the water level of the Bailpar River,” people asked.

“This is a central government project, so we cannot oppose it or stop the work without understanding its purpose. I will arrange a meeting with the officials of the relevant department as well as the villagers and discuss the project. I assure you that if the project does not benefit the population, then I will support their opposition,” said Pravin Arlekar, MP for Pernem.