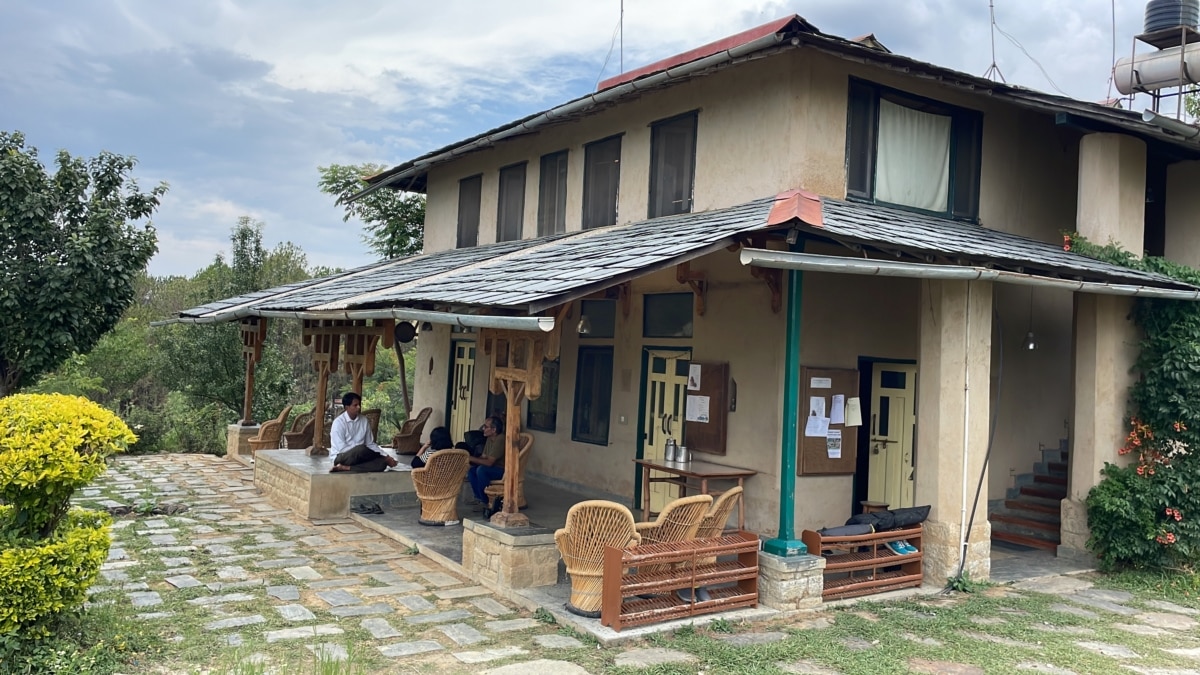 When merchant marine professional Guru Dutt Goswami is away from work, he comes to stay at his ancestral home in Palampur, northern India. The mud structure, built decades ago along the Himalayan slopes, stays warm in winter and cool in summer.

“I think mud houses, just like the body, have pores, they breathe,” Goswami says, relaxing in a veranda. “They’re so comfortable, they have nice ventilation. It’s all because of the mud, the stubble, the material used.”

While brick and concrete houses have become the norm in recent decades, a centuries-old tradition of building houses with mud and other local materials is seeing a resurgence in the northern state of Himachal Pradesh. , nestled in the Himalayan mountains.

Environmentalists have welcomed the trend, saying reviving ancient building traditions is one of many responses to modern challenges such as climate change.

The Sambhaavnaa Institute of Public Policy and Politics, a non-profit organization that promotes sustainability, is leading the way – the sprawling Palampur campus is a mud structure. The small hill town is located in the middle of tea plantations.

“It is important to revive vernacular architecture,” says Mohammad Chappalwala, program coordinator at the institute. “The idea is to build with local materials, building with natural materials is the direction to take.”

Made with mud quarried from the site where the building stands, stones, slate and bamboo from the hills, he says these houses reduce the carbon footprint – modern building materials such as steel and cement are created through carbon-intensive industrial processes and must also be transported hundreds of miles. Equally important, the earthen walls serve as a natural insulator, reducing the energy needed for cooling and heating.

There are many other advantages – the lighter and lower structures are more resistant to earthquakes compared to concrete buildings constructed in recent decades. “This has been proven by the houses that have been left standing after the big earthquakes in the Himalayan region,” says Chappalwala.

The centuries-old tradition has been adapted to modern times. Wider doors and windows with glass let more light into the houses, plastering is done with natural materials that last much longer, while kitchens and bathrooms partly use concrete and tiles to ensure modern conveniences.

Goswami, for example, built a conventional structure around the old mud house with a modern modular kitchen and bathrooms. But the earthen house serves as her main living space, while the old kitchen with fireplace is used for some simmered meals in winter.

Architects say countries like India need to rethink the standardized international styles of concrete houses and glass and chrome skyscrapers and take a closer look at incorporating old traditions that evolved in the pre- electric. More and more are reviving them in other parts of the country – they vary by region.

“For example, houses in Gujarat had overhanging roofs to protect the buildings from heat and courtyards inside for ventilation. by 25%. structures without projections,” emphasizes Pandya.

India is increasingly suffering from intense heat waves – the problem is compounded by glitzy glass and concrete buildings that trap heat.

As part of a project to build 18 villages in Gujarat, Pandya’s company, Footprints EARTH, used local materials, including mud houses in desert regions. “It’s thermally efficient, and even though it’s over 50 degrees centigrade outside, it’s around 34 degrees inside,” says Pandya. “Just in the name of modernism and ape, we cannot ignore these traditions.”

Such structures have also proven to be durable, resistant to rains, floods and earthquakes, the architects say.

However, wider acceptance of traditional architectures remains a challenge – most people in Himachal Pradesh and other places still choose to build concrete houses which have become associated with development and status. But some, like Goswami, inspired by his travels, lead by example.

“I’ve been to Morocco, I’ve been to Latin America, and believe me, they have maintained and kept their old heritage, their structures. Why not us? Why not the Indians? We have such a beautiful heritage,” he said.

Some former city dwellers find that staying in a mud structure deepens their connection to the land. “Yes, sometimes we get scary critters, but there are also possibilities where birds can also build nests that they can never do in houses in the city,” says Fatema, Chappalwala’s wife, who works in the programs team of the Sambhaavnaa Institute. The former Mumbai resident has lived on campus for several years with her son. “Because it’s mud, it’s very refreshing, it’s soothing to the mind and body.”