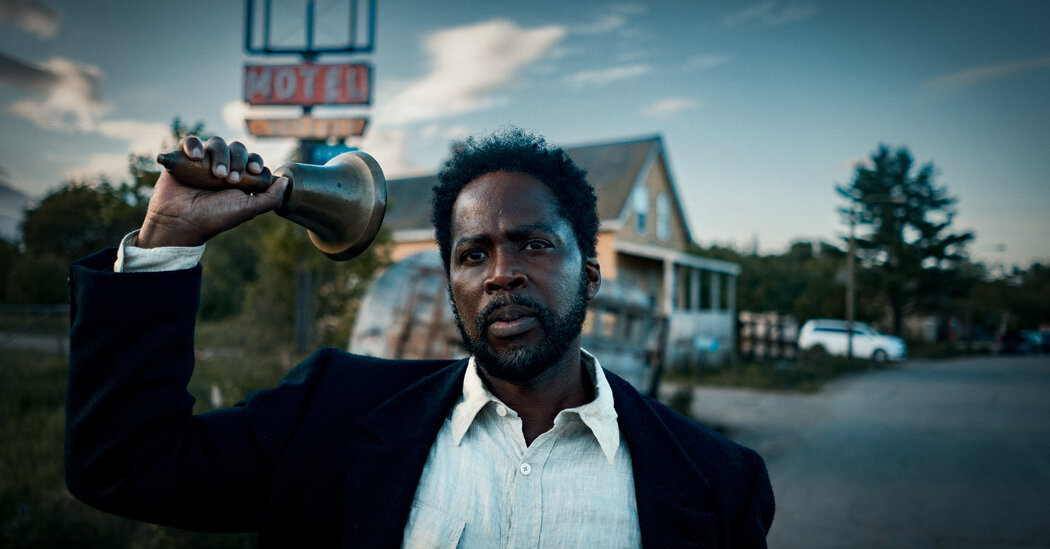 A hot time in the haunted house

An apartment building in New York with creepy neighbors and dark relationships in the basement, reminiscent of “Rosemary’s Baby”. A rural town in which you are trapped with harrowing monsters, much like “The Mist”. A rambling mansion that feeds on the spirit of its new resident, a struggling writer, like a suburban Connecticut version of “The Shining.”

The horror genre is perfectly positioned to reflect the global case of madness we’ve endured over the past two years, and three current TV dramas offer solidly meat-and-potatoes variations on the haunted house storyline. . The troubled protagonists walk through the doors (figurative or literal) and can’t come back, at least not without a lot of screaming and being scratched by demons. Sounds familiar!

by Netflix “Archives 81”, Epix “From” and those of Starz “Shining Valley” are similar not only in content, but also in how they reflect the current state of television production. They do the work: they hold your attention; they deliver satisfying creeps and shakes; and they’ll leave your mind the minute they’re over, giving way to the next frenzy.

In another era, they would have been movies. Now their need to fill eight to 10 episodes means you have to anesthetize yourself to plot glitches, meanders, and inconsistencies. But let’s be honest, we’ve all had to adjust our standards in this time of industry-scale storytelling.

The eight “Archive 81” episodes, which debuted in January, have a hushed, detached vibe (which may reflect its roots in the podcast of the same title) and a slow, spaced-out pace, as if the right machine on which to read it can no longer be found.

This fits well with the show’s fetish for an early age of recording and viewing technology. It’s a cleverly modulated found-footage story, starring Mamoudou Athie (“Sorry for Your Loss”) as Dan, a restorer hired to restore a set of Hi8 videocassettes from the early 1990s. pulls down a rabbit hole of demonic possession and family grief, with side stories: one set in a dank New York rental property, the other in a creepy upstate resort.

The premise also gives the creators — Rebecca Sonnenshine (“The Vampire Diaries,” “The Boys”) developed the show with horror veteran James Wan’s production company — the chance to indulge in visual and audio effects. rough and static of the analog era. As the action unfolds through both Dan’s restoration and viewing of old tapes and his current investigation, retro material is continually essential to the plot and mood: answering machines, vintage audio cassettes, VHS movies, 16mm home screens. movies, a Fisher-Price toy camcorder. A Teac bridge is lit up like a Hollywood starlet.

That nostalgic surface tension adds enough texture to make “Archive 81” a satisfying watch, even if you catalog its bag of influences – Polanski, Lovecraft, Aleister Crowley, “Stranger Things.” (And while you mark time during the many shots of people’s faces as they stare at the monitors.) It also features an engaging performance from Dina Shihabi as the woman who shot the original videotapes and finds herself in a daydream relationship. with Dan. The ending sets up a second season which Netflix has yet to announce.

There is also nostalgia in “From”. Its cast and crew members — including lead director Jack Bender — are “Lost” alumni, and the new series has a similar setup: random people inexplicably gathered in a mysterious place with an inscrutable set of rules. .

The place is now a Middle American hamlet rather than a Pacific island, and the situation is more serious. It’s bad enough that no one can leave – all roads magically lead to the city. It’s worse than when the sun goes down, human-looking creatures appear which, if allowed into a house, tear the occupants apart. They make the black smoke of “Lost” more cuddly in comparison.

Stephen King is a stronger point of reference for “From,” with its rural twilight vibe and underlying extreme violence. Essentially, it’s a King-style morality tale, with a bit of Shirley Jackson: when it’s not about dishing out clues to the overall mystery, the story focuses on how each individual reacts, on who resigns himself to the “rules” and who defends himself.

“From” won’t win any awards for its adventure — its cryptic approach to world-building and characterization would be right at home on CBS or Fox. But so far, its premise has enough visceral appeal to keep the series engaging (its fifth episode, of 10, arrives Sunday), aided by strong performances in key roles, including Harold Perrineau as as the town’s reluctant leader.

There’s no mystery about the influences when it comes to “Shining Vale,” which premieres Sunday: Series creators Jeff Astrof (“Trial & Error”) and Sharon Horgan (“Catastrophe “), acknowledged that the idea was “The Shining” in comedy form. This time, the blocked writer is a woman, Pat Phelps (Courteney Cox), whose only success was a soft-core knockoff “Fifty Shades”. After a period of dissipation that included sex with a handyman (but no new books), she retreated to the suburbs with her family, hoping that her new surroundings – and her new billboard home dark – will be conducive to creativity.

What they’re conducive to is haunting, of course, in the form of Rosemary, a frustrated former resident played comically by Mira Sorvino. By switching genres from “The Shining”, Astrof and Horgan alter the story in a fun way. Cox’s Pat, like Jack Nicholson’s Jack Torrance, terrorizes his family, but in strictly emotional rather than physical ways. (She picks up an ax from a closet wall in a moment of direct homage.) She can be a rude and mean-spirited bundle of nerves, but we get why: her family is too clueless and self-absorbed to see what she’s dealing with. with, starting with her stupid husband, played to perfection by Greg Kinnear.

She’s also stressed out because she’s not a very good writer. The cure for that – it’s a minor spoiler, but it’s pretty predictable – turns out to be Rosemary, who gets Pat’s juices flowing but at a steep price.

The dirty sitcom side of “Shining Vale” is always fun (seven of the eight half-hour episodes were available for review), and Cox, while not terribly funny, has the comfort of an old pro in the role. And in the hands of an all-female directing team that includes Dearbhla Walsh (“Fargo”), Alethea Jones (“Evil”), Catriona McKenzie (“Mythic Quest”) and Liz Friedlander (“Conviction”), the show is lively, well-acted and truly scary. No complaints about being trapped in this house.