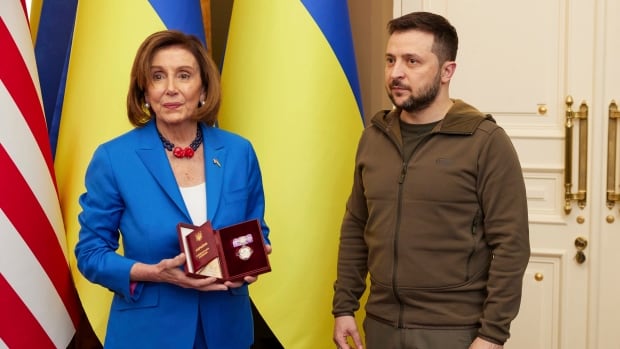 Women and children were evacuated from a steel mill that is the last defensive stronghold in the bombed-out ruins of the Ukrainian city of Mariupol, while US House Speaker Nancy Pelosi visited the Ukrainian President in the nation’s capital to show American support.

Russia’s offensive on Ukraine’s southern coast and eastern industrial heartland is forcing Ukrainian forces to fight village by village and more civilians fleeing airstrikes and artillery fire as the war reaches their gates.

Thousands of residents are believed to have remained trapped with little food, water or medicine in the Mariupol blockade. The United Nations was trying to negotiate the evacuation of 1,000 civilians who were holed up with around 2,000 Ukrainian fighters under a sprawling Soviet-era steelworks that is the only part of the city not occupied by the Russians.

In a video later released by Pelosi’s office, both the speaker and Zelensky thanked each other for their support during the war.

“We will win and we will win together,” Zelensky said.

Pelosi added: “We are here until the victory is won.”

“Your fight is a fight for everyone”

“We believe we are visiting you to thank you for your fight for freedom,” said Pelosi, who is second in line to the US presidency after the vice president and the most senior US leader to visit Ukraine since November. start of the war.

“We are on the frontier of freedom and your fight is everyone’s fight. Our commitment is to be here for you until the fight is over,” Pelosi added.

“Our delegation traveled to Kyiv to send an unequivocal and resounding message to the world: America stands firmly with Ukraine,” she said in a statement released Sunday.

The delegation continued its trip to southeastern Poland, and Pelosi said she would later travel to the capital, Warsaw, to meet President Andrzej Duda and other senior officials. Poland has taken in more than three million Ukrainian refugees since Russia launched its war on February 24.

“We look forward to thanking our Polish allies for their dedication and humanitarian efforts,” she said.

Russian forces embarked on a major military operation to seize significant parts of southern and eastern Ukraine after their failure to capture the capital. Mariupol is a major target due to its strategic location near the Crimean Peninsula, which Russia seized from Ukraine in 2014.

Two groups of civilians left the residential area around the Azovstal steel plant in the southern Ukrainian city of Mariupol on Saturday, the Russian Defense Ministry said on Sunday.

The ministry said a total of 46 civilians left the area and received food and shelter. Hundreds of Ukrainian fighters and a few civilians are said to be holed up in the vast factory after the Russian siege of the port city. Numerous efforts to organize a ceasefire to allow residents to leave the city have failed, with Moscow and Kyiv repeatedly blaming each other.

Meanwhile, Russian news agency RIA Novosti said on Saturday that 19 adults and six children had been taken out of the Azovstal steelworks, but gave no further details.

“They are women and children”

A senior official from the Azov regiment, the Ukrainian unit defending the plant, said 20 civilians had been evacuated during a ceasefire, although it was unclear whether he was referring to the same group. There was no confirmation from the UN.

“They are women and children,” Sviatoslav Palamar said in a video posted on the regiment’s Telegram channel. He also called for the evacuation of the wounded: “We don’t know why they are not taken away and their evacuation to Ukrainian-controlled territory is not discussed.”

Ukraine has blamed the failure of many previous evacuation attempts on continued Russian shelling.

UN humanitarian spokesman Saviano Abreu said the world organization was negotiating with authorities in Moscow and Kyiv over evacuations from Mariupol, but he could not provide details on the effort in course “due to the complexity and fluidity of the operation”.

Abreu did not confirm the video posted on social media allegedly showing UN-marked vehicles in Mariupol.

In the town of Lyman in the Donetsk region, where at least half the population fled Russian bombardment, around 20 elderly people and children holding bags with their dogs and cats boarded a van marked with a sign that reads “evacuation of children” in Ukrainian. . It sped towards the town of Dnipro as explosions were heard in the distance.

“Freed us from what? Our lives?’

“The liberators came and freed us from what? Of our lives? said Nina Mihaylenko, a professor of Russian language and literature, referring to Russian forces.

It is believed that up to 100,000 people are still in the port city, including civilians who were entrenched with around 2,000 Ukrainian fighters under the sprawling Soviet-era steelworks which is the only part of the city not occupied by the Russians. .

Details on the scale of Saturday’s evacuations and the possibility of more to come on Sunday were unclear given the number of parties involved in the negotiations and the volatile situation on the ground.

In his nightly video address on Saturday evening, Ukrainian President Volodymyr Zelensky switched to Russian to urge Russian troops not to fight in Ukraine, saying even their generals expect thousands of them to die.

The president warned that Russia was “gathering additional forces for further attacks against our military in the east of the country”. and accused Moscow of recruiting new soldiers “with little motivation and little combat experience” so that units gutted at the start of the war could be sent back to battle.

“But why do Russian soldiers need them? Why do their families need them? said Zelensky in Russian.

“Every Russian soldier can still save his own life,” Zelensky said. “It is better for you to survive in Russia than to perish on our land.”

Ukrainians desperate for rescue in Mariupol as Russian advance delayed