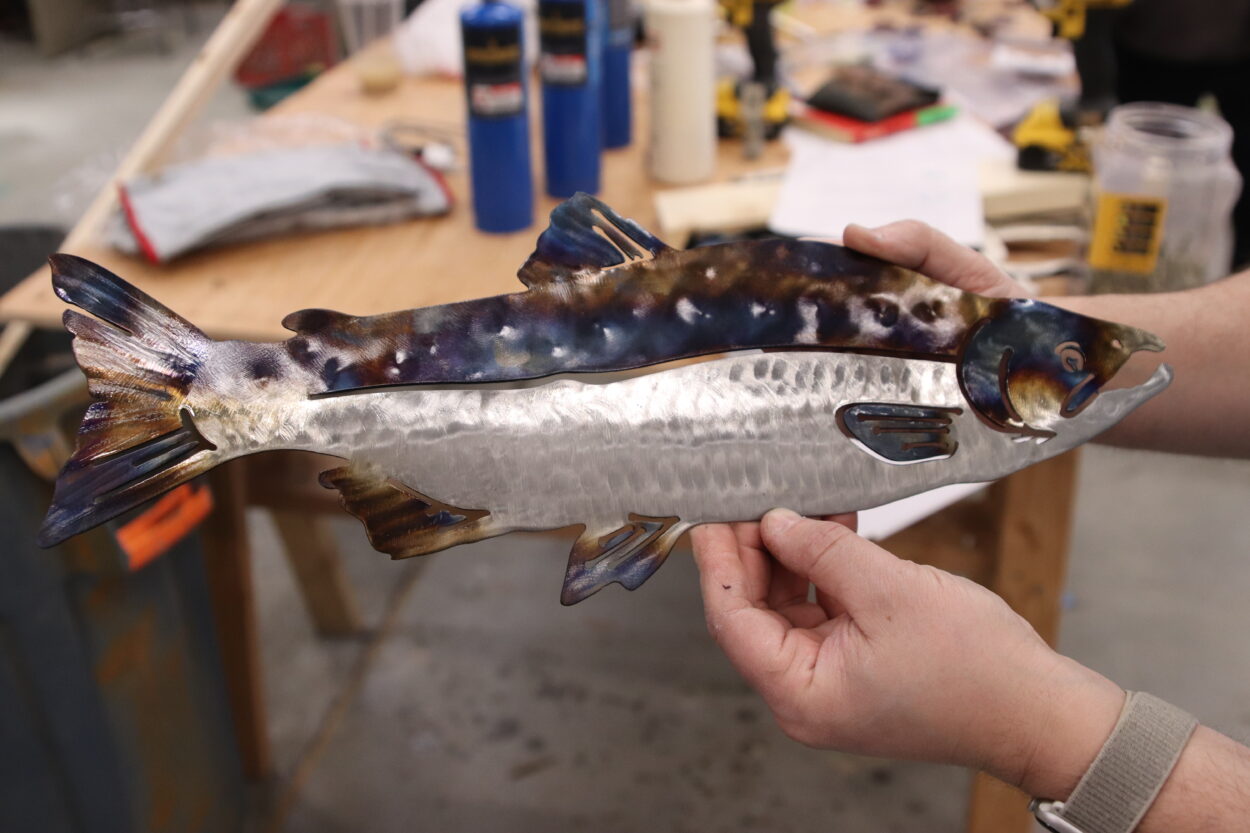 A grant-funded program at Sitka High School is active again, after a two-year setback during the pandemic. Students in vocational and technical training courses gain hands-on experience working with equipment that could take their skills to the next level – literally – and propel them into jobs in the aerospace industry.

The high school shopping lesson conjures up all sorts of images – I’m sure many see it as “The Breakfast Club” for kids who don’t quite fit in elsewhere, a mix of motorheads and carpenters tearing up cars rusted and nailing backyard storage sheds.

But it is high time to abandon this stereotype. Mike Vieira, a teacher at Sitka High Career and Technical Education (CTE), uses a $30,000 plasma cutter, a tool that takes a pattern or design — it could be anything you can create on a computer screen. computer – and cuts it with precision in rolled steel or other metal.

Vieira says CTE is not your grandfather’s workshop class.

“Our goal is to produce students who are ready for high-demand, high-skilled, high-paying jobs,” Vieira said. “And the way the world turns – there will definitely be large-scale manufacturing – it comes down to small stores that are going to be able to produce single-use items. So unique pieces of this and unique pieces of that, and to do that you need to be able to come in with CAD (computer aided design) you need to be able to take your CAD file and output it to a device and tell it how to run its toolpath. And from there, and then it’s just limited to your imagination.

Sitka’s CTE program won a $10,000 grant from BP in 2018 to support the purchase of this cutter, which moves an 85-amp plasma torch – which looks like an arc welder – across a wide table at waist height. There’s now a piece of steel on the table with a dozen die-cut shapes, a collection of die-cut salmon, sports logos and house numbers – all designed by students.

“It’s a lot of fun,” said Nik Calhoun, a senior at Sitka High. “You learn to program on the computer and through CAD, it’s really cool, actually.”

Calhoun shows me a bear’s head rendered in the traditional Northwest Coast form-line design, from a pattern drawn by Sitka artist Charlie Skultka, Jr. It’s about two feet wide, is painted beige and is mounted on a backing plate that will be part of a new sign outside Sitka Elementary School. This is only his third or fourth plasma cutter project, and it looks like it could have come from a professional store.

“This one here for Baranof (elementary school),” Calhoun said. “It took me about a class and a half. So it’s quite fast. »

The beauty of the plasma cutter is contained in this work: the school district would never order a custom sign like this – it’s just too expensive and time consuming to make by hand. The plasma cutter brings the efficiency of a manufacturing process to produce something very unique. And it’s an amazing way to approach new designs – just like high-end manufacturers like Boeing are doing now.

“We are fortunate to be one of 40 Boeing partner schools,” said Matt Johnson, a visiting CTE from Snohomish High School. “And we have a program called Core Plus Manufacturing, which is an aerospace and advanced manufacturing focused program that was developed in part by Boeing and some of their major suppliers who work with them. And students get an industry-recognized certificate at the end of my class. And if they have that certificate, Boeing said, “We guarantee you’ll get an interview.”

Johnson was the 2018 CTE Teacher of the Year in Washington State. Mike Vieira met Johnson via social media, applied for funding from New Visions, a program of the Alaska State Council on the Arts and the National Endowment for the Arts, and offered him an invitation to Sitka for three days this spring to train Sitka’s CTE faculty. on the cutter, and to work with students, who now see the workshop class through different eyes.

“So in my school, this plasma cutter is the workhorse,” Johnson said. “It’s almost an instant gratification machine where kids can take an idea, put it on a computer screen, and a few minutes later have something they can then grind, work on, and apply color, and having something tangible. So that’s a great way to get into a low-risk way of doing really precise things. And then we can build from there, because I teach aerospace skills and and where do we go from there. So for my school, this plasma cutter is where we can hook the kids into these projects.”

“I was working on an inlay, yeah a wood inlay project on the CNC router,” student Tyler Barton said, reflecting on what he was doing before the cutter came along. “And now I’m going to move on to this plasma cutter. I have already cut two product projects on this.

Tyler Barton is also a senior. He went from wood to metal when the cutter arrived. But he does not plan to use his skills professionally. He heads to college and the cutter helps him see what’s possible

And my editorial observation of that remark is this: Wilbur and Orville Wright were bicycle mechanics, whose hobby was airplanes.

Before leaving the CTE building, instructor Mike Vieira tells me that working with Matt Johnson was one of his best teaching days – a chance for his students to see that the learning never stops.

“I kind of gave him my classes,” Vieira said, “and I’m just a student alongside my students, which I think is fun for me and fun for my students to see me in. this role.”