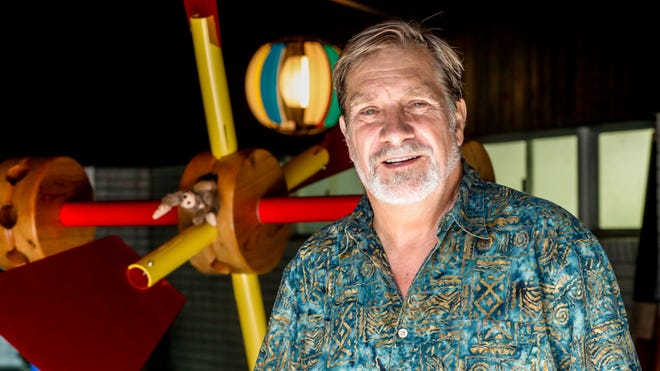 Jim Barnes’ foray into owning one of the city’s most whimsical yards began with a huge game of croquet. In an effort to reuse a surplus of balls he had received, the artist collected PVC pipe, wood shelving paper and two five-gallon buckets bolted end to end. What emerged was an entire scene with a mallet, stake, and hoops.

What also emerged were new visitors spotting the scenery of Fall Creek Road outside his home near the Hillcrest Country Club. Some people rang the doorbell asking if they could take pictures and play. Others skipped the authorization part and jumped straight into the frolics.

“Not until they don’t break anything,” he laughed.

The 2014 Croquet Set was the first giant toy garden artwork to appear in Barnes’ yard in seven plus years. By day, he’s a semi-retired representative of a manufacturer who works with companies that make components and provide engineering solutions, primarily in the heavy haul industry. The products he meets in his work, as well as his experience in industrial education, feed the habit of making art.

Each spring, Barnes shapes a new piece of work and presents it until he has to mow. Passers-by saw red and blue darts at attention, pieces of jacks rolling down a hill, and a pogo stick that rivals the size of an elephant. Some parts, like carbon fiber arrows that appear to pierce trees, stay on longer, after defying weather conditions and mowing grass. Parents tell Barnes their kids are begging them to walk past his house to see what’s new.

Overlooking the mirth on the lawn is a historic work of art – Barnes’ mid-century modern home. Built in 1959, it belonged to the founder of Indianapolis Choc-ola chocolate drink, Harry Normington Sr. Barnes, who moved there in 1993, continues national historic recognition of the residence.

He is often inspired by toys from his childhood. Take the vintage Tinkertoys, for example, which Barnes turned into an almost floor-to-ceiling contraption with spinning fan-shaped spokes powered in part by a grill motor. He is currently housed in the Indoor Pool Hall, which was famous enough to cover the April 30, 1967 cover of Indianapolis Star Magazine when the Normingtons threw a party.

Although Barnes didn’t start his giant garden art hobby until about seven years ago, he has spent much of his life in creative endeavors. After attending school in Indianapolis, South Bend, and Fort Wayne, he earned a degree in Industrial Education Technology from Ball State University and went on to graduate school. His training included woodworking, ceramics, electrical engineering, photography and graphic design.

Barnes began to become heavily involved with the Indianapolis Art Center around 2000 when former director Joyce Sommers asked him to help. Soon after, he started taking classes and getting the students he mentored to do the same. With the lessons, access to the centre’s resources came and Barnes found himself doing more woodworking and three-dimensional parts.

Her livelihood also prompts the artist to reflect on the creative uses of materials.

“Every day I look at the materials, the processes and the costs,” Barnes said.

His relationships with makers have often linked Barnes to pieces for his giant art. Sometimes he uses items that are about to be thrown away, and other times he buys them himself. For each piece, Barnes sets a limit of $ 500 and 50 hours of labor. And it has to fit in the back of a pickup truck so it can be moved.

One piece will often determine the size of the rest of the materials needed. He spends much of his planning process determining scale and often collaborates with others who put their skills to work in certain parts of the creation.

Reused kart wheels determined the size of a massive skateboard Barnes built due to its connection to NXG Youth Motorsports, where he volunteers and contributes. On the underside is an NXG alum paint Stuart kelly by artist Rafael Caro. Using a television set aside by RecycleForce as a smartphone, Barnes attached a selfie stick and donated the finished piece to the organization. Other works that have ended up in nonprofits or around his house include a pencil floor lamp and pencil sharpener, a Bic lighter, and a toothbrush with a floss container made from it. a water softener tank that contains salt.

The ever-lingering question of whether Barnes can make great new works of art is what excites him most. Right now he’s working on thread and a needle the same height as a standard letterbox – even using precise measurements to capture the exact scale of the needle hole.

“You kind of put the components together and you’re 90% sure it will work. The other 10% comes when you actually physically start” putting them together, he said. “This is the difficult part. This is the part which is rather fun.”

Looking for things to do? Our newsletter contains the best concerts, works of art, shows and more – and the stories behind them