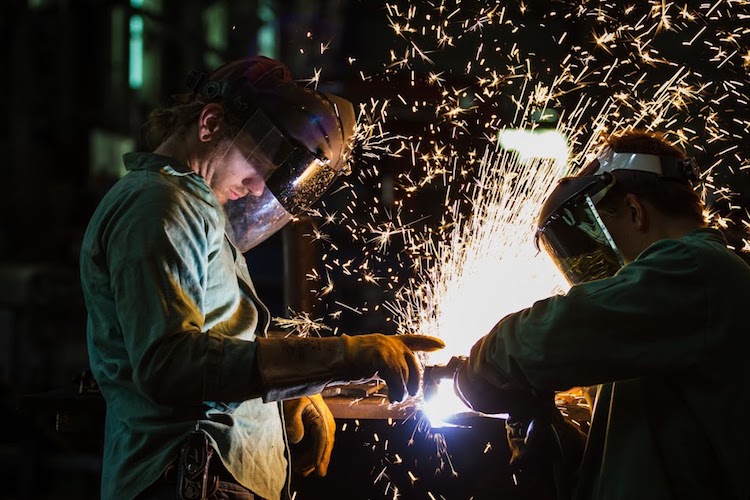 Growing up poor in the Appalachians, he welded old cars out of necessity, never thinking it could turn into a career.

But when he heard about the Industrial Arts Co-op mobile sculpture studio, Farkas signed up. The summer traveling initiative taught him and nine other high school students welding and metalwork techniques through the creation of public art.

Sparks flew through nearly a dozen parts of the city, from Millvale to Shadyside.

Now, several years later, the 19-year-old has a good job with a railroad company and owns a house in Pittsburgh.

“I have a pretty nice setup thanks to the welding,” says Farkas.

Tim Kaulen, Founder of Industrial Arts Co-op, Seeks to Generate More Success by Opening the Industrial Arts Workshop, a year-round youth arts and workforce development center in Hazelwood. After seeing the success of the mobile sculpture workshop – which for five years served as a pilot program for the larger enterprise – he knew it was time to take root.

With the help of Hazelwood Initiative, the organization that purchased the building on Herbert Way where the mobile sculpture workshop will operate, Kaulen’s dream comes true.

When it opens next September, the 5,000 square foot space will have a new roof and toilets, a ventilation system, garage doors and 10 training booths where apprentice welders aged 15 to 18 years will get practical experience from professionals and work on collaborative projects. service learning projects.

“We realized that a permanent installation and year-round programming would be supported and have an impact in Hazelwood and the surrounding communities,” says Kaulen, a self-taught welder and sculptor who started the co-op in Hazelwood a year ago. decade. “I am truly grateful to the people who have continued to advocate for our interests. It is a long-standing commitment for me to serve Hazelwood.

The workshop will begin accepting applications from local adolescents in the coming months. He recently received a grant from The Heinz Endowments and is at the end of a fundraising campaign.

To raise additional funds for the expansion, the co-op assembled a team of artists from Pittsburgh to create and donate a sculpture inspired by Carrie Deer, the 50-foot-tall masterpiece created by Kaulen and other artists from the cooperative at the former blast furnace site of US Steel Homestead Steel Works in Swissvale.

“Little Buck” is being auctioned off and all proceeds will go directly to the Industrial Art Workshop. People can bid online until December 1st.

Kaulen is also looking for mentors, including active and retired artists, welders and metal workers, who want to share their expertise with local youth to prepare them for the job market.

“Our goal is not to replicate what trade schools do, but to create strong candidates for other opportunities such as higher education and technology programs,” he says. “We are preparing the ground for knowing how to be present, how to be on time, how to dress appropriately. Welding is just one of those trades that opens so many other conversations.

After his experience as a student in the mobile sculpture workshop, Farkas served as an instructor for it the following summer.

“It’s very rewarding,” he says. “When I entered the program, I didn’t know what I was getting into. I was a recluse. It made me more social and gave me something that I’m passionate about. I love seeing the journey that children go through and seeing them have an outlet for their emotions. “