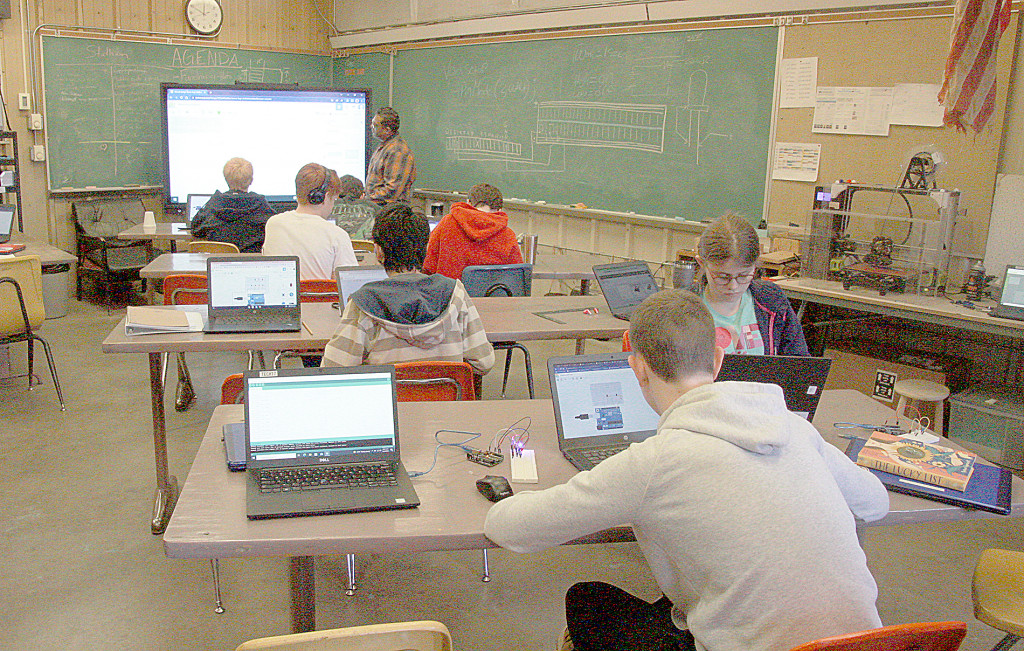 LUSK – An atmosphere of concentration and expectation fills Mr. Martinez’s industrial arts room as middle schoolers settle in with laptops and small circuit boards called arduino boards. Arduino boards sense the environment by receiving inputs from many sensors and affect its surroundings by controlling lights, motors, and other actuators. They are plugged into laptops where seventh and eighth graders use open source and free software to practice coding and circuitry.

Students first build the diagrams on the laptop. They use block coding for the program, but all of them also learned from scratch. They can convert the blocks to zero in order to see the configuration and the individual coding commands.

For this particular project, once they set up their circuit of lights, they tell the program to run the sequence. If it works, they can convert the schematic to an actual wiring diagram that students will learn to read. Students then connect the arduino board to the laptop via USB. This provides the programming and power link. The students then connect the wires, the highest and the ground according to the wiring diagram, connecting power and trying out their new skills.

If everything is set up correctly, the students will see their lights turn off successively. As each group achieves this, they high five each other and wave to Martinez to look at what they’ve created. When a board doesn’t work as expected, some ask Martinez for help, but the students rarely need it, often problem-solving alone or with a peer to find the solution. Once they have completed the first step, they are instructed to reduce the relay time until the lights run in a row and up and down without much time in between.

This time the students change the timing in the scratch instead of using the coding blocks themselves. As they determine the timing and order, the students laugh and smile. What these students are doing is not only fun, but has myriad applications. As Martinez points out, as students become more proficient, they will work on programming functional electrical circuits and systems in the classroom and with real-world applications.