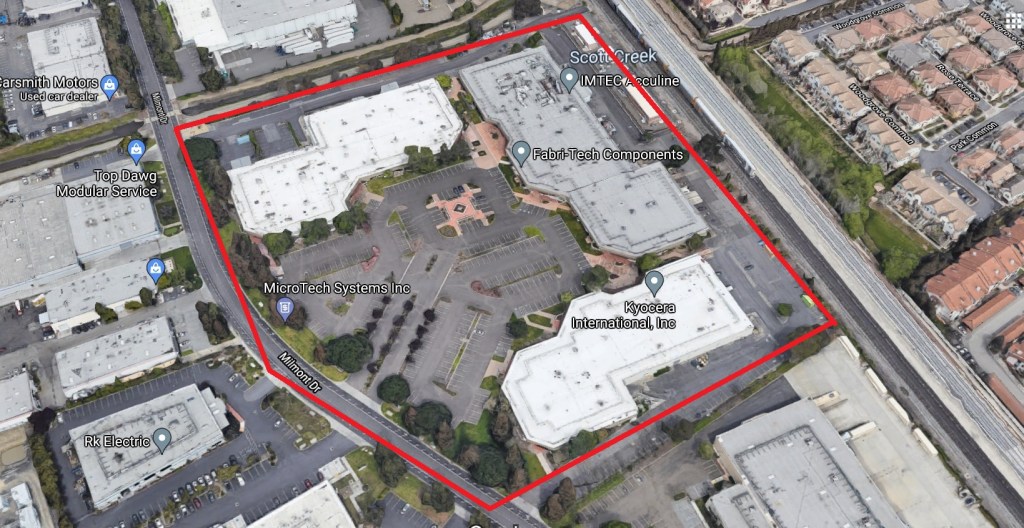 FREMONT — A veteran Texas real estate developer with ties to Amazon is considering a massive redevelopment of an aging tech campus in Fremont, city documents show.

Hines, one of the nation’s largest real estate developers, has proposed replacing a technology complex on Milmont Drive between Dixon Land Road and Kato Road, according to filings with Fremont city officials.

A modern industrial center would sprout in place of aging technology buildings on Milmont Drive in Fremont, according to documents from the city’s planning department.

In April 2021, Hines purchased the existing three-building Dixon Landing Research Park, which has addresses 49000, 49036 and 49086 Milmont Drive, according to property records filed with the Alameda County Recorder’s Office.

The buildings total a combined area of ​​209,300 square feet, according to a brochure distributed by Lee & Associates, a commercial real estate firm that was marketing the complex at the time the property was purchased.

The property is close to Interstate 880 and a few freeway exits from the sprawling Tesla Motors vehicle factory in Fremont.

Hines intends to demolish the three existing buildings on the site and replace them with an all-new structure.

The new industrial building, if the city approves the project and Hines builds it, would total 265,600 square feet, according to Fremont city records.

The finished project would be a building envelope.

In February of this year, Hines leased a massive data center in Hayward from Amazon that totals 278,500 square feet.

Hines in recent years has been an active player in Bay Area commercial real estate.

Real estate company Hines has invested more than $1 billion to buy a range of office and research buildings in the Bay Area.

These are among the properties Hines has purchased in recent years.

In recent years, uncertainty has arisen over the future use of office space due to the coronavirus outbreak and a blurry picture for brick-and-mortar retail resulting from a shift to online shopping.

As a result, property owners and developers have sought redevelopment opportunities across a range of sites.

Technology-focused manufacturing, life science, biotechnology, and laboratory projects have become popular replacements for many buildings and commercial sites in the Bay Area.

Victim feared Nova Scotia mass killer would come to her home, an hour before he arrived